Ali Carbone grew up as the oldest sibling to three younger brothers with autism.

In a Facebook post that has since gone viral, Ali talks about her family’s love for each other, and the importance of spreading autism awareness.

She underscores how autism can present itself differently in every person, even those from the same family, and describes how her brothers — now 24, 18, and 16 — are great examples of this. Autism can often come with comorbid disorders, and those also vary from person to person. One of her brothers is nonverbal, blind, and has epilepsy; another is verbal, sociable, and has OCD; and the other is “mildly” verbal and hyperactive.

But, she explains, their autism and other conditions do not define them. “Michael lives for a good Disney movie throwback, and would be content with giving hugs and kisses all day, everyday. Anthony quite literally thinks he’s Michael Jackson and will destroy you in any performance related competition. Luke loves to run and hang outside, and will take every opportunity to mess with his oldest brother.” 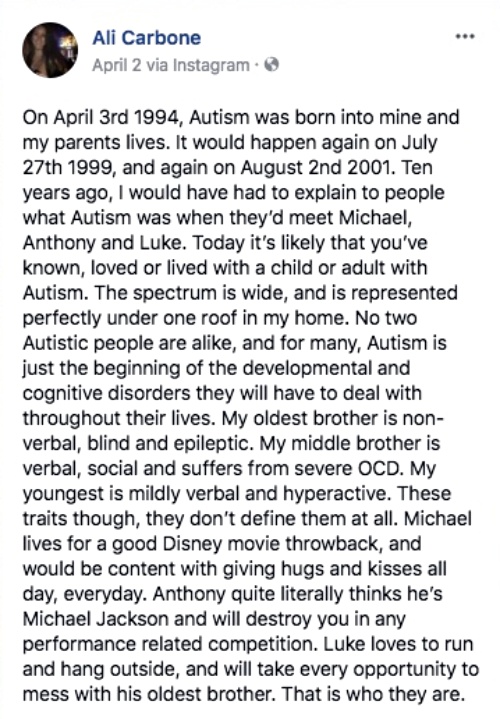 In an interview with PopSugar, Ali shares some of the worry she’s had about her brothers that many invidivuals with family members on the spectrum share: what will happen to them when their parents are gone?

This worry is prevalent among many autism families. Take, for example, the Lazili family. Even at 81 years old, mom Annette worries about what will happen to her daughter, Jeanine, after she passes away. Jeanine is 47, has a job, and lives in a group home. But still, that worry won’t ever leave Annette, who says, “I swear I’m going to live forever for her.” (Read more about Jeanine in our article here.)

One of the things that can help with this worry is finding housing for those with special needs — but that’s not always available. 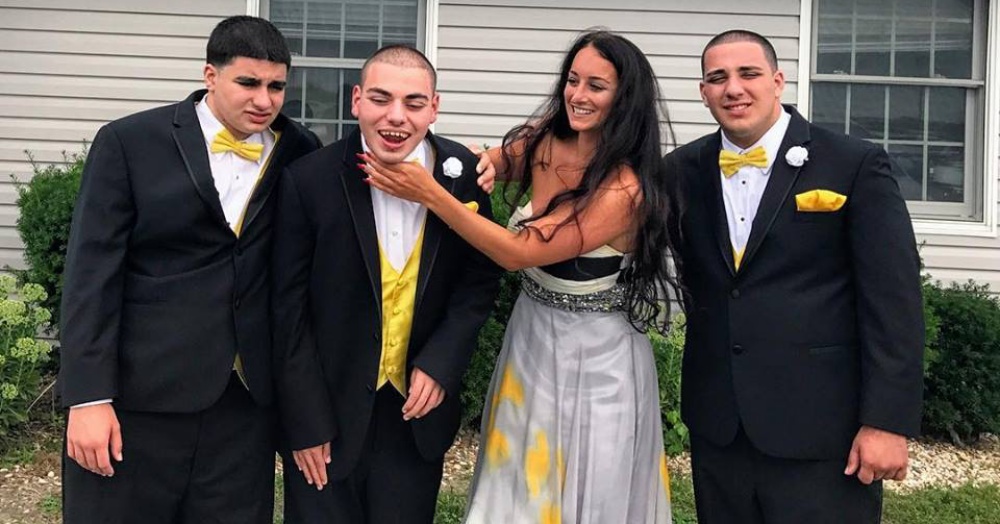 After the overwhelming response her post has gotten so far, Ali has some additional advice: “I also want people to take my post and think about the humans behind the diagnosis. Right now, there are limited housing options adults with autism. A tough reality for many parents of autistic individuals is, ‘Where will they end up when I die? Will they be taken care of?’ The worry never ends.”

Even if you can find housing, deciding what’s best for your children and what’s best for you as a caretaker can be a heartbreaking and enormously difficult undertaking in and of itself — especially when it comes with unsolicited judgement from outsiders.

In 2013, Ali’s parents decided to place the three boys in a housing facility together. Five days a week, they stay there and get any support they need. Then, on Saturdays, the boys come home to their parents. It’s worked out wonderfully for the family, though it took some getting used to. 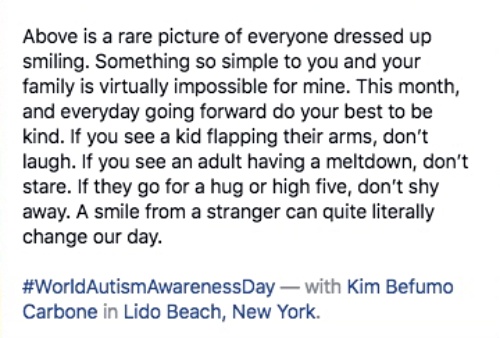 “I hated it at first,” Ali told PopSugar. “My house was way too quiet. But it was really nice to see my parents get to sit down after work and take a minute for themselves. Parents with disabled children, they need that.”

At the end of her Facebook post, Ali urges everyone to be kind to everyone, whether it’s a kid or an adult. If they’re out in public doing something that the rest of society views as strange, don’t judge them, but accept them.

And at The Autism Site, we wholeheartedly agree with that sentiment.

Click “NEXT” to learn about a special housing project for people on the spectrum that a set of parents spent 17 years developing!