Jack Rogan of Dovecot, Liverpool, is only eight years old. Yet he is struggling in a way that no human being — let alone a child — should ever have to.

Jack is autistic, and the differences he notices within himself as compared to his other peers have made him “feel like a bad person.” Over the past year, he has written a series of disturbing, suicidal notes that say things like “I hate my life,” “I wish mam kill me [sic],” and “What’s wrong with me[?]” He also has verbally expressed similarly disturbing sentiments, like “Please, everyone forget me” and “Burn me alive.”

The whole ordeal culminated to its worst point in October, when Jack tried to take his own life with a pair of scissors. His mother, Kerry Linnell, immediately brought him to Alder Hey Children’s Hospital in Liverpool, where, frustratingly, the specialist ward was not able to take him. Though staff agreed that he was in severe distress, they simply did not have enough beds.

So for the time being, Jack is staying in another ward, waiting for the mental health care he so desperately needs to become available.

As of December 13, he has been waiting for seven weeks.

I repeat: a suicidal eight-year-old has been waiting for mental health care for seven weeks.

While not necessarily the hospital’s fault — in fact, Ms. Linnell has praised Jack’s ward’s staff for being “amazing” — this situation points to a desperate need for better access to mental health care for children — especially those on the spectrum, who are at higher risk of psychiatric disorders like depression and anxiety than their non-autistic counterparts. And that need is undoubtedly one that is worldwide, not just in the UK. 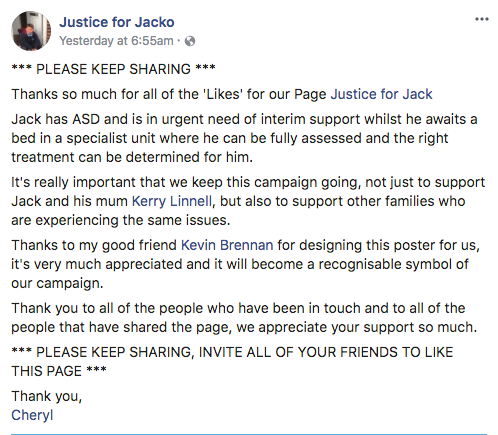 If you or a loved one is experiencing thoughts of suicide or has plans to make a suicide attempt, there is help and hope. If you feel comfortable talking on the phone, call the National Suicide Prevention Lifeline at 1 (800) 273-8255. If not, you can also receive help through I’m Alive, an online chat option, or you can text 741-741 if you live in the United States.

For more information on the risk of suicide in ASD individuals, see the next page.