Joseph “Seph” Ware is a typical 14-year-old at his school in West Monroe, Louisiana. He attends classes every day school is in session, he loves the outdoors and he has a best friend. In this case, Seph’s best buddy is a golden Labrador retriever mix named Presley, and she’s been with Seph since he was 10. She also got a special honor in Seph’s school yearbook because she’s his guardian and helper as a service dog.

Seph’s parents received a pleasant surprise when the yearbook came out in the spring of 2016. The photos were taken the previous September, and it completely slipped Seph’s mind to tell Mom and Dad that Presley got her own photo, too. Joe Ware, Seph’s father, didn’t know about it until a fellow parent at the school took a photo of the yearbook page and posted it to social media. Ware said he was just tickled that Presley got her own photo because she’s a vital part of Seph’s life. Getting the famous shot, with Presley’s leash in her mouth, wasn’t easy. 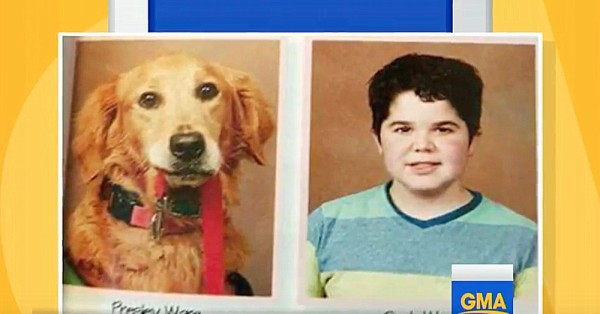 The photographer tried to get Presley to sit straight for the picture, but she would always roll over and want him to rub her tummy. After about five to 10 minutes, they realized the leash in her mouth was the way Presley hands Seph her leash. Once the photographer got the leash in her mouth, the photo was a snap. Sonja Hogg, the school’s yearbook adviser, said it was a no-brainer to have Presley in the yearbook.

Presley has been with Seph for four years, and everyone at the school treats her as if she’s another student, and every student deserves a photo in the yearbook. She helps Seph, who has a genetic disorder called Duchenne muscular dystrophy, socialize with other students. Seph moves physically slower than others his age because of his degenerative muscle difficulty, and Presley helps break the ice when people approach Seph. Other than his genetic disorder, he’s just like any other kid. The side-by-side yearbook photos of Seph and Presley show that a dog truly is a boy’s best friend and lifelong companion, and nothing can take that bond away from either of them.

Have you known a service animal that received special recognition?