Attending a new school is, without a doubt, a very scary and intimidating venture. Will your peers like you? Will you make friends, or will you find yourself alone? Will the teachers be kind and understanding? Questions and worries abound.

It can be nerve-wracking enough if you’re a neurotypical student starting at a new school, but it can be even worse when you’re an autistic student, considering that social situations are already an inherent struggle to begin with. People who don’t understand autism can get the wrong idea about you.

That’s why autism mom Cara Thulin took to Facebook with an open letter to the students, teachers, and parents of Kickapoo High School, her son’s new school in Springfield, Missouri.

Prior to the beginning of the 2017 – 2018 school year, Thulin posted to Facebook with a beautifully-worded message about her son, Zeke Gibson.

“This boy is in your ranks now. And I need you all to help me,” she began. 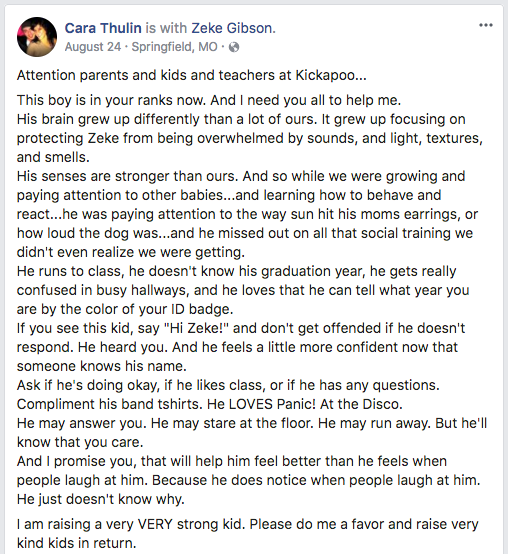 She went on to explain that Gibson’s brain was wired differently than that of other people, making him more sensitive to sensory input and causing him to “[miss] out on all that social training we didn’t even realize we were getting.”

“He runs to class, he doesn’t know his graduation year, he gets really confused in busy hallways, and he loves that he can tell what year you are by the color of your ID badge,” she wrote.

She encouraged readers to say hello to him in the hallways, ask him questions, notice and compliment his band t-shirts, and try not to get discouraged if he doesn’t respond—because he very well may not. Even if he doesn’t answer, the questions and comments will still mean a lot to him because he’ll realize that someone knows about him and cares. 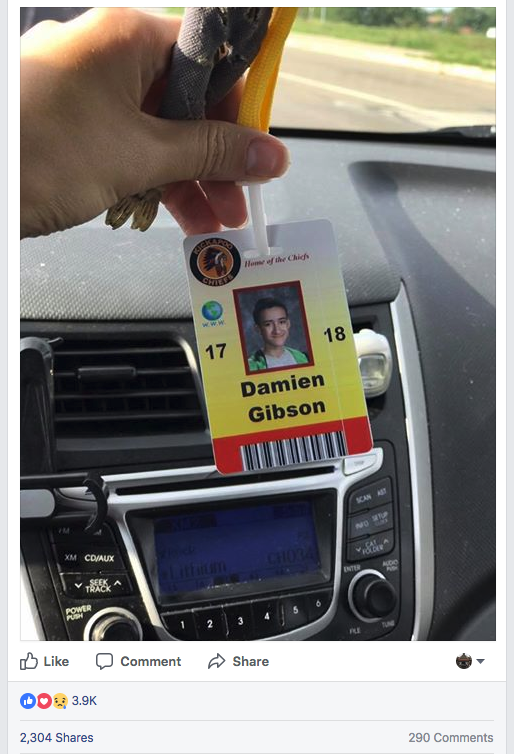 She concluded her open letter with a powerful call to action: “I am raising a very[,] VERY strong kid. Please do me a favor and raise very kind kids in return.”

Since the letter was posted to Facebook on August 24, 2017, Thulin’s message has gone viral and has been shared over 2,000 times.

Hopefully, then, the message has reached the eyes of Gibson’s peers and teachers. And hopefully they’re taking his mother’s words to heart.