Autistic Man Hurts His Neighbor’s Feelings In Outburst, Then Makes This Brave Gesture

We’ve all said things we regret. We’ve all hurt the people closest to us. Too often we lash out at people we care the most about, and when the dust settles the damage is hard to repair.

Such was the case with Ruby and her neighbor, Christopher. Ruby lives in the same building as Christopher, who has autism, and she had always gotten along well with him. But there came a day when he had an outburst and said what she describes as “really unkind” things about her family. Ruby did not share what exactly was said, but she did tweet that the words crushed her, and that she was “in tears for days.” 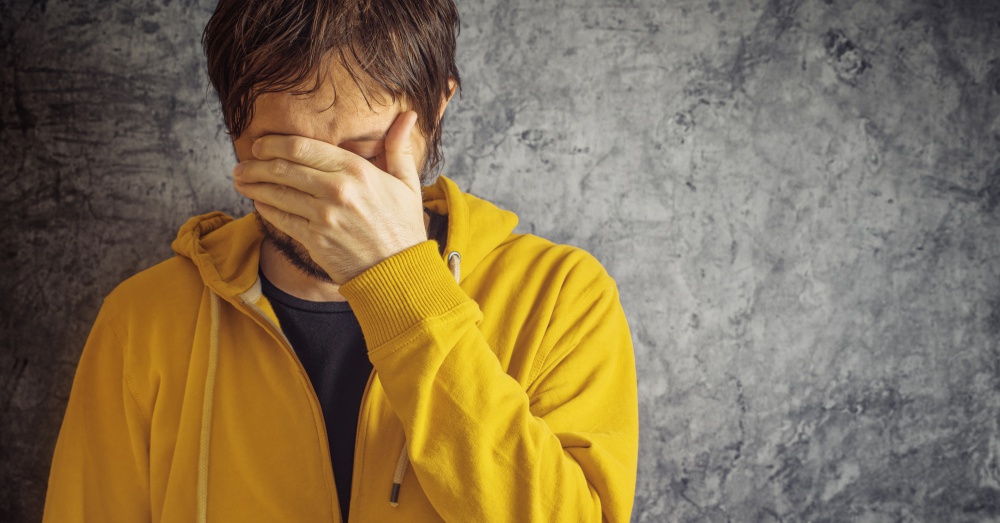 Those on the spectrum struggle with outbursts, and it can be hard for them to apologize, or even to know how to go about making amends. But Christopher took a risk, and a week after the outburst he left Ruby the trifecta of apology packages: hand-written note, flowers, and candy. 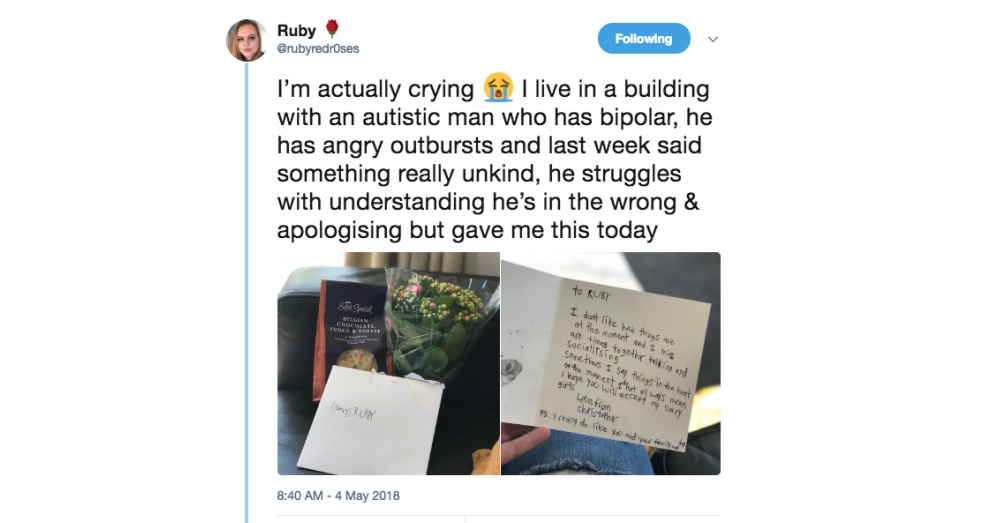 The note was sincere and heartfelt. It read:

I don’t like how things are at the moment and I miss are times together talking and sociallising. Sometimes I say things in the heat of the moment I do not all ways mean. I hope you will accept my sorry gifts.
Love from Christopher

P.S. I really do like you and your family and dog

The note deeply touched Ruby, and of course she accepted the apology. When she shared Christopher’s gifts and note on Twitter, people were touched. 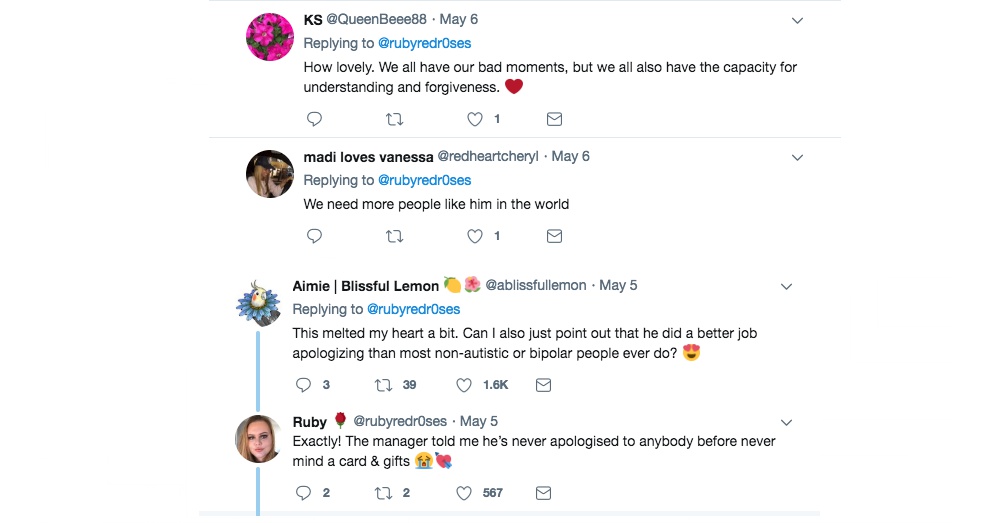 Not everyone can identify with having autism or bipolar disorder, but everyone can identify with saying things they regret, and anyone who’s been in that position knows how hard it is to apologize after the dust settles. It takes a heap of courage and humility. By celebrating Christopher’s willingness to apologize rather than stay angry at him, Ruby encouraged many in the autism community: 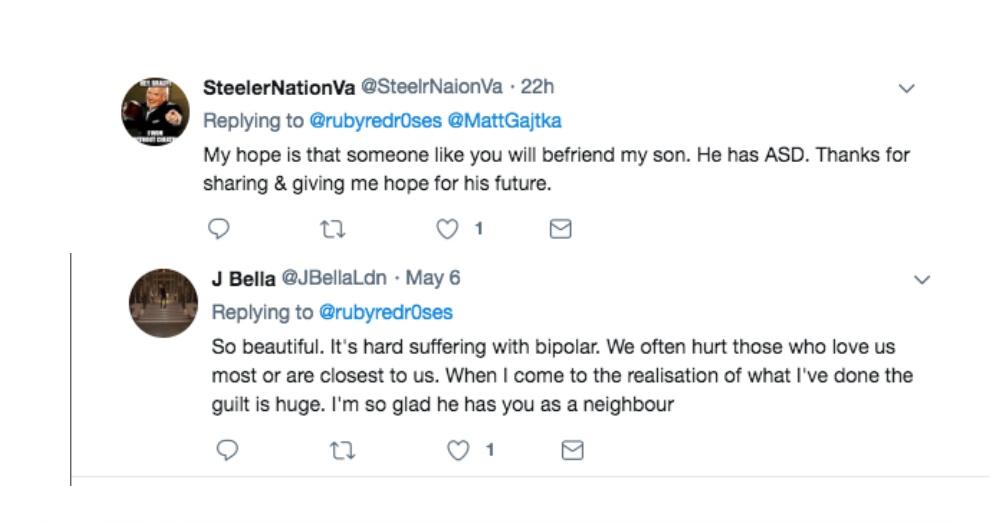 Ruby’s post (as of the time of publication) reached 227,000 likes and 34,000 retweets. After so much attention and praise for both her and Christopher’s actions, Ruby wanted to share that part of her understanding for Christopher comes from her own diagnosis. She has been diagnosed with Asperger’s syndrome and shares on her website that she always felt like an outsider growing up.

People on Twitter were touched by Ruby’s friendship with Christopher, and they were touched by his ability to recognize that he’d made a mistake and needed to apologize. Several people called for Ruby to give Christopher a hug, but she replied that while she happily accepted Christopher’s apology, she knew he wouldn’t feel comfortable with a hug. 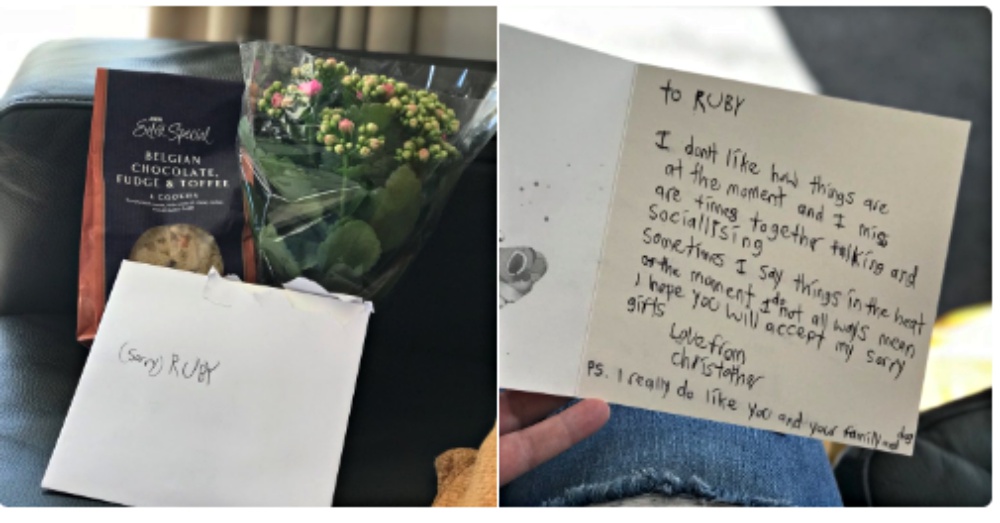 Ruby and Christopher’s story resonates with us because everyone wants to experience genuine friendship and acceptance. While anger and insults are easy to come by on the internet (and in life), this story celebrates the better aspects of our humanity: forgiveness, humility, and love.

Ruby and Christopher, both on the spectrum, remind everyone what real friendship looks like. Our gratitude to both of them!

Update On Medical Marijuana To Treat Autism Symptoms: Click “Next” below!