On June 16, 2017, Niko shared on Facebook a happy update to this crazy story: he was going to be able to go to the United Nations Pilgrimage for Youth, after all!

He had this to say:

I wanted to let you know that I am definitely going on the UN trip next month! There were people talking to people for a while and it finally got worked out. I couldn’t be more exited to get on a plane!

I want to thank everyone who spoke out for one Autistic kid who hear [sic] the word “no” and said ‘why not?’ Also to Gordon at [Disability Rights Oregon] for being my voice. To my parents I am especially grateful, and understand that this is my destiny. You have taught me well.

Niko’s mom, Loreta Boskovic, said the amount of support the family has received since the incident began has been overwhelming. “People said they were appalled and disappointed,” she stated. “I would read the comments to Niko, and it was very powerful to hear this support from people we didn’t know.”

A HUGE congratulations to Niko on this exciting update. We at The Autism Site could not be happier for you, Niko!

Niko Boskovic is a 15-year-old boy from Portland, Oregon. He has nonverbal autism and is a very bright young man who uses a letterboard to communicate his thoughts.

After he entered his work about Ukraine’s history into an essay contest, he won the opportunity of a lifetime through the national fraternal organization Order of Odd Fellows United National Pilgrimage for Youth, Inc.

North Portland’s Peninsula Odd Fellows Lodge selected him to join 300 other students from all over the globe to attend the United Nations Pilgrimage for Youth. The lodge even raised the $1600 necessary for him to participate in this prestigious, 10-day trip. 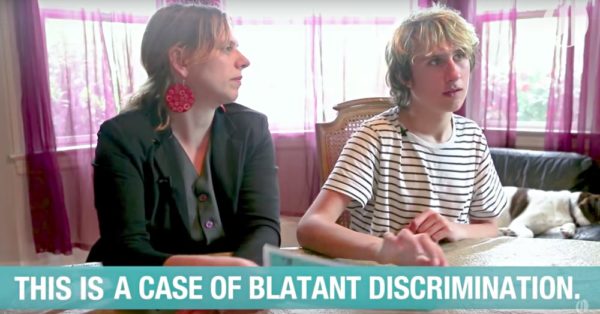 But his family says the invitation was rescinded after the organization discovered Niko was on the spectrum.

“This is a case of blatant discrimination,” Niko spells on his letterboard in the video below.

The organization has yet to release any sort of written statement as to why Niko was un-invited, but they told Loreta that chaperones were not allowed on the trip (she had told them that she wanted to accompany him and assist him with his communication). They have also verbally stated that they “are not equipped to accept people with disabilities.”

Needless to say, Niko’s family, as well as Odd Fellows Lodges across the state, are fighting back. The Lodges sent a letter, asking for an explanation as to why Niko was suddenly rejected.

“We got nowhere,” said David Scheer, the Peninsula Odd Fellows Lodge secretary. “They refunded our money, and they’ve refused to talk with us.”

Niko’s family has also brought the case to Disability Rights Oregon. One of the group’s attorneys, Gordon C. Magella, said he was shocked when he learned their story. “I have never seen something so blatant with no explanation,” he said. “I have worked on some cases where there’s a plausible excuse, or a practical reason. But not here.”

Share this story to raise awareness. This is an outrage!