One McDonald’s employee is being lauded for going above and beyond the call of duty for a young boy with autism.

For weeks, Bonnie Kandel’s seven-year-old son, Lief, was going on and on about a Teen Titans toy that his friend at school had gotten in his McDonald’s Happy Meal. Lief is on the spectrum and, as his mother explained, he can become fixated on things. Needless to say, he wanted that toy. Badly.

But disaster struck when Kandel finally took Lief to McDonald’s: the Teen Titans toys were on display in a kiosk, but “they had run out, no more left. They were now on to Batman.” When she asked if she could buy the toys in the kiosk, the answer was no.

Kandel went on to explain the situation to the manager. Meanwhile, an employee named TQ was listening. And she understood. 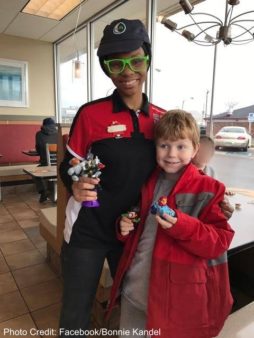 With effort and dedication, TQ managed to convince her boss to let her dismantle the kiosk so Lief could have the Teen Titans toys. She finally got the OK and spent the next 15 to 20 minutes working to get all of them from the kiosk.

Lief’s reaction to the whole thing? Elation. Kandel says he has played with the toys for hours and has even brought them to bed with him. They also accompany him when he leaves the house.

“McDonalds, I hope you know how lucky you are to have such a sweet woman on your staff,” Kandel wrote in a Facebook post to Love What Matters. “Someone who takes special care of their customers, someone who goes well above and beyond.”

She also told The Huffington Post that the gesture gave her hope. Though she has been worrying a lot lately about Lief’s future, TQ’s incredible act of compassion reminded her that people are innately good and do their best in life.

“That hope is worth more than any toy and the world needed to see moments like this and share in the hope that one person can offer through generosity and compassion,” she said.

Has anyone ever done something like this for you or your child? Share your story in the comments!