Kahlief Hill, who manages the Hampton Inn in Selinsgrove, Pennsylvania, was working the front desk on a Friday night.

He was on the phone when he looked up to find a 13-year-old boy named Colin standing there. Colin asked Kahlief if he’d like to see a card trick.

For the next 30 minutes, Kahlief and Colin exchanged magic tricks.

The next night, Colin returned to the desk but told Kahlief he had already forgotten the trick Kahlief had taught him. “Come back out; I’ll show you again,” the hotel manager said.

So for the second night in a row, Kahlief and Colin had fun sharing tricks and chatting at the front desk.

After Colin went to bed, his mom Megan told Kahlief it’s not often that total strangers treat her son with so much kindness and respect.

He didn’t know that this little boy has autism. That learning and doing card tricks is a passion of his because it helps to quiet and focus his brain as well as keep his hands busy. He didn’t know that this little boy had lost his dad a few years ago, has been on the waiting list for a “big brother” for well over two years, and lives with only his mom and sister, so he very much misses interacting with male figures. 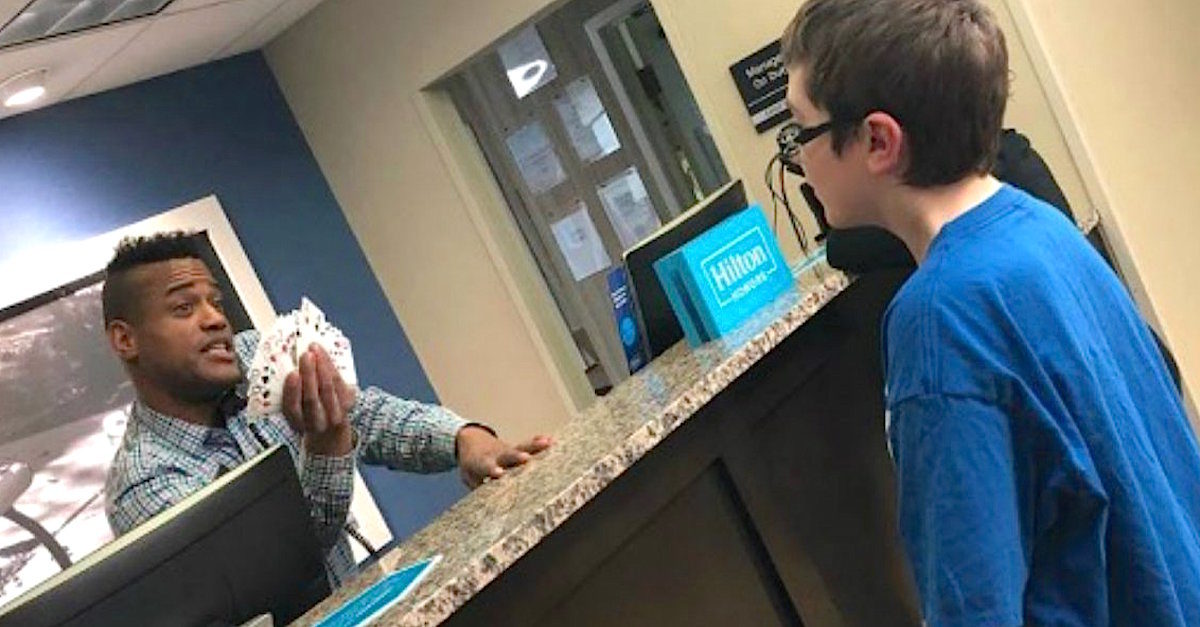 Kahlief very easily could have told Colin he was busy, or to come back later, or any number of things, but he didn’t. He allowed Colin to hang out at the desk with him for what felt like forever, watching Colin do card tricks and then showing Colin some tricks that he knew as well. Never once made Colin feel like he was a nuisance or a burden.

Megan posted about the act of kindness on Facebook, along with a photo of the pair working on card tricks.

Kahlief woke up the next day to hundreds of new friend requests from people all over the world. The post quickly went viral and has been shared thousands of times. Kahlief’s manager Jason Gabany saw it, too.

Learn more in this video!