Hand dryers in public toilets can be intolerably loud and painful to those on the autistic spectrum and with other special needs.

Studies show the noise from these machines is loud enough to violate federal noise exposure standards, creating a traumatic experience that makes public toilets not an accessible amenity for children and adults.

Many people are unaware of the pain that awaits when they enter a public restroom, with sometimes 5 or 6 dryers in a room operating at once.

“For parents of children with SPD (sensory processing disorder) or even kids who just have sensory issues, the fear of those gosh-darn-it-just-plain-awful public toilets are enough to have you avoiding outings altogether,” writes blogger Sharla Kostelyk.

The unpredictable roar from a hand dryer starting up can be absolutely terrifying to some, The Dallas Morning News reports. When dryers are placed near entrance doors they can be accidentally activated on entering and can cause major distress.

“You’re standing for up to a minute in front of a machine that is making as much noise as a construction worker drilling a hole in the road,” says Audiologist.co.uk spokesperson Jonathan Ratcliffe. “The only difference between him and you is that he’s been issued with ear defenders.”

As TODAY reports, one of the individuals who helped bring this fact to light was 13-year-old Nora Keegan.
Keegan’s research on the sound coming from the hand dryers for a science fair project was published in the Canadian journal Paediatrics & Child Health.

Keegan found that the Xlerator hand dryer, Dyson Airblade and Dyson Air Blade V machines were the loudest, operating at about 110 decibels. Just 10 decibels higher is enough to cause immediate pain to ears.

According to the Autism Society, there are more than 3.5 million people in the U.S. currently living with Autism. Autistic or neurodivergent individuals see and hear the world differently than others. They can also become overwhelmed or feel physical pain when loud or offensive environmental stimulation makes it difficult to communicate, Intellectual Disability and Health reports, which means public restrooms can be fraught with fear and anxiety.

There is rarely a “one-size-fits-all” standard for public resources, but it is clear that loud hand dryers pose a risk to everyone.

Sign the petition and help us encourage new noise standards for public bathrooms so all Americans can use them in comfort.

Turn Down The Volume On Loud Hand Dryers 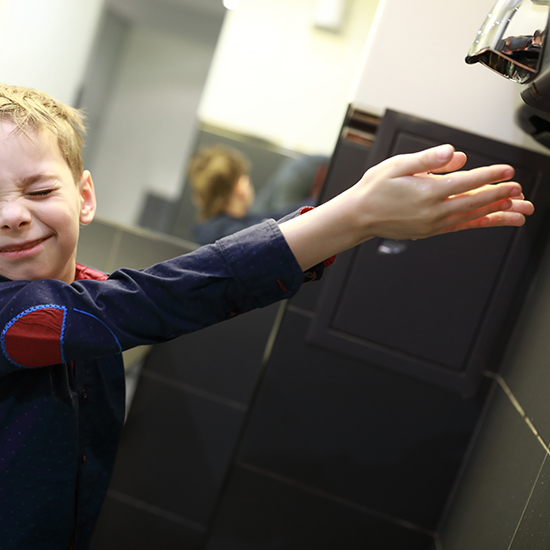 Many public bathrooms contain machines that generate blasts as loud as 110 decibels.

We should not be regularly exposing this volume to children and individuals for whom such noises could cause great stress.

Sign and ask for quieter hand dryers in public bathrooms!