After fighting against cervical cancer for over two years, Joey Feek passed away at 2:35 PM on March 4th, 2016. She was holding her husband Rory’s hand. Learn more about her final days and read her obituary by visiting our other post here.

Rory revealed on his blog that Joey can no longer get out of bed — but that her spirit is still strong. On his blog This Life I Live he wrote:

“Though now, she can no longer get out of bed – she is so sharp and clear and her pain, for the most part, is so under control by the medicine that talking to her – you would think she’s her normal self. Thinner. Much thinner. And with a hip new hairdo. But she is beautiful. So so so beautiful. When God begins to take the light from the outside… the light inside just shines all that much brighter. It’s amazing. She’s amazing.” 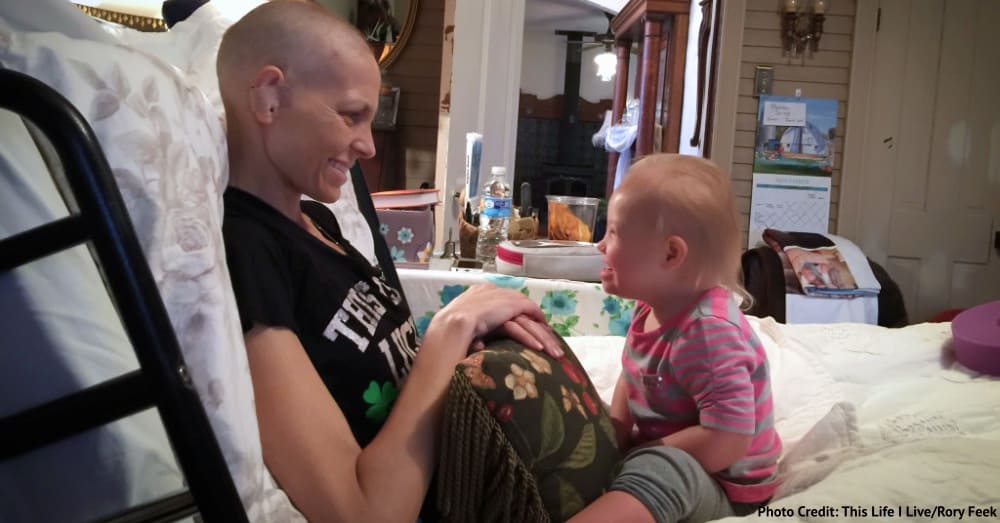 Joey and husband Rory Feek rose to country fame after appearing on the reality show “Can You Duet” in 2008. Since then, they’ve recorded several albums, opened a restaurant, and created their own television show. In 2014, they welcomed little Indiana, who was born with down syndrome.

Just months after giving birth, in June of 2014, Joey was diagnosed with cervical cancer. Fortunately, the tumor was caught early; she had a radical hysterectomy and then was given the all clear.

However, a year later, Joey was diagnosed again. This time, it was stage IV; the cancer had spread to her colon. She had more surgery, and in August, she and her family temporarily moved to Georgia, to be closer to the Cancer Treatment Center of America outside of Atlanta where Joey would be getting chemo and radiation. Less than a week before they left, Rory and Joey recorded 12 tracks for a new album. Then, during their time in Atlanta, Joey started recording the vocal tracks in her hotel room — while in the midst of all her treatments.

Since she was a little girl, Joey had wanted to do an album of old, traditional hymns — and she and Rory decided now was the right time to record that album. Joey picked all of her favorite hymns, and in the video above, she sings “Softly, Tenderly.”

She smiles while she sings, and the clips of her playing with her daughter will break your heart.

After the round of treatments ended, Joey felt hopeful — but towards the end of October, doctors found more tumors throughout her abdomen. There was nothing else they could do for her, so she decided to go home — and “home” in this case was her childhood home in Indiana.

Cindy Watts from The Tennessean recently interviewed Joey there. “More than anything, I felt like I failed at something,” Joey said in the interview. “I thought I did everything. But God decided for me that my job of singing for people down here is my legacy, and he needs me singing up there. That’s how I look at it.”

Joey is currently under hospice care, and she’s asking for a very specific prayer during this time: “Pray for a miracle… and even more so, peace with His decision.”

Joey has been surrounded by loved ones, like daughters Hopie and Heidi (Rory’s children from a previous relationship) and friends and family from all over. Her incredible spirit and beautiful voice will be missed.

“Pray for a miracle… and even more so, peace with His decision.”