9-Year-Old Applies To NASA, Gets A Different Job Offer Instead

Jack Davis, a nine-year-old boy from New Jersey, calls himself a Guardian of the Galaxy. His sister just thinks he’s an alien. When the young space lover saw that NASA was looking to hire someone to fill the position of Planetary Protection Officer, he knew he would be a perfect candidate for the job! After all, what young boy doesn’t dream of being the planet’s protector?

The job at NASA is a real one, created as part of the international Outer Space Treaty of 1967. The treaty states that nations “shall pursue studies of outer space, including the moon and other celestial bodies, and conduct exploration of them so as to avoid their harmful contamination and also adverse changes in the environment of the Earth resulting from the introduction of extraterrestrial matter….” That is where the Planetary Protection Officer comes in.

Far from fighting aliens or other epic heroics worthy of science fiction films and comic books, the main task of the Planetary Protection Officer is to ensure that alien microbes and other potentially hazardous substances are contained from contaminating the Earth and that any space exploration on our part does not contaminate other planets and moons. It sounds less fun and less sci-fi than the actual job title implies, but it’s still important (H.G. Wells’ classic War of the Worlds gives a good, albeit fictional, reason for this task).

And while the prestigious job — which has a salary of up to $187,000 — is sure to draw many applicants from the scientific community, it also drew a very special application from nine-year-old Jack Davis. Not deterred at all by his age or the competition, Jack took it upon himself to write a letter by hand applying for the job and sent it to NASA. 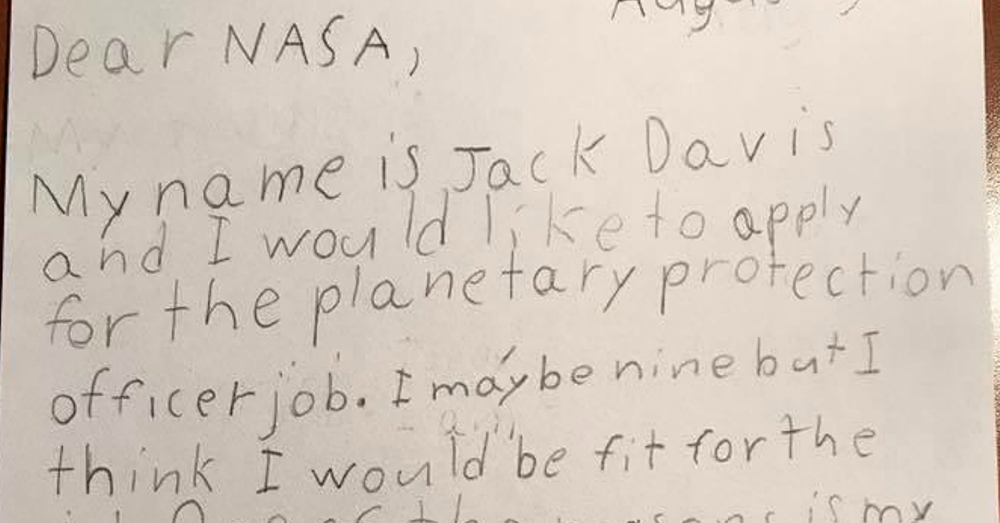 Photo: NASA — Nine-year-old Jack Davis wrote to NASA about why he should be the next Planetary Protection Officer.

My name is Jack Davis and I would like to apply for the planetary protection officer job. I may be nine but I think I would be fit for the job. One of the reasons is my sister says I am an alien, also I have seen almost all the space and alien movies I can see. I have also seen the show Marvel Agents of Shield and hope to see the movie Men in Black. I am great at video games. I am young, so I can learn to think like an Alien.

NASA received Jack’s hand-written job application, and while they could have tossed it aside to focus on more “serious” candidates, they did something entirely different. NASA stepped up to the plate and showed exactly why they exist in the first place — to foster, celebrate, and build upon the curiosity and creativity that is scientific inquiry. So NASA not only took a look at Jack’s letter, but they also took the time to reply, as well. Jim Green, Director of NASA’s Planetary Science Division, wrote a letter to Jack; and Jonathan Rall, Director of Planetary Research, personally called and talked to him, as well. Both wanted to congratulate the young would-be-scientist for his interest and encouraged him to keep up his enthusiasm — as well as his grades! — so he could come work at NASA when he’s a bit older.

I hear you are a “Guardian of the Galaxy” and that you’re interested in being a NASA Planetary Protection Officer. That’s great!

Our Planetary Protection Officer position is really cool and is very important work. It’s about protecting Earth from tiny microbes when we bring back samples from the Moon, asteroids and Mars. It’s also about protecting other planets and moons from our germs as we responsibly explore the Solar System.

We are always looking for bright future scientists and engineers to help us, so I hope you will study hard and do well in school. We hope to see you here at NASA one of these days! 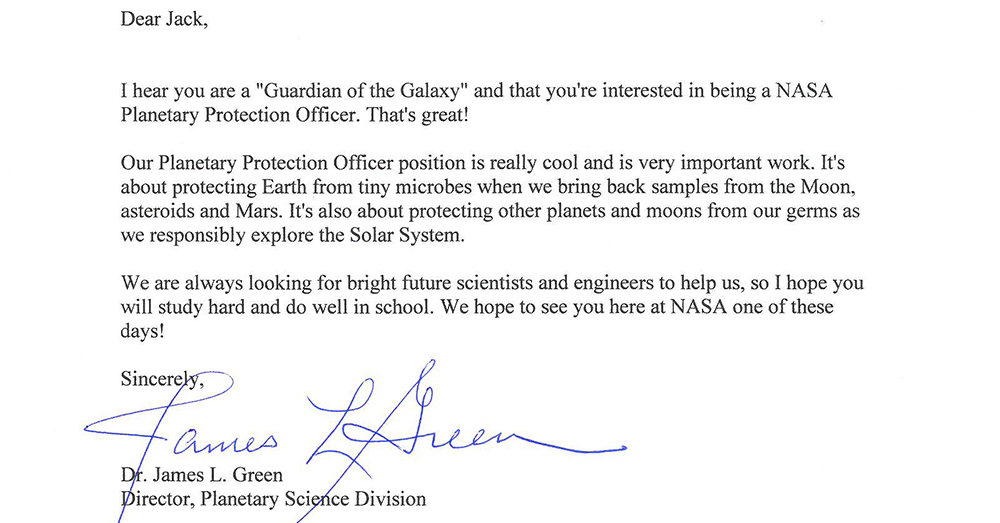 Jack told ABC News that it would be “really cool” to work for NASA, adding, “I feel like — I am the only one who really wants a job at NASA this young.” For now, it looks like someone else will be filling the role of Planetary Protection Officer at NASA, at least until Jack finishes school and is able to reapply for the job then.

That’s not where the story ends for Jack, however. The Liberty Science Center in New Jersey is finishing construction on the Jennifer Chalsty Planetarium. The new planetarium near Manhattan will be be the largest planetarium in the Western Hemisphere when it opens. The museum is also home to scores of other exhibits, science camps, and educational attractions for children and adults alike.

Watch the invitation from Liberty Science Center’s Paul Hoffman in the video below!