After Son With Autism Melts Down On Plane Mom Praises Flight Attendant For Saving Day.

There are moments when each of us are given the opportunity to become someone’s angel. On a recent Delta flight to Washington, D.C., it was flight attendant Amanda Amburgy who filled that role for one struggling family.

Amanda was working the route when she noticed a little boy who was growing more and more agitated during the flight. Since Amanda loves kids she made a beeline for the family, discovering 5-year-old Xayvior Johnson’s flustered parents trying desperately to quiet their screaming child. 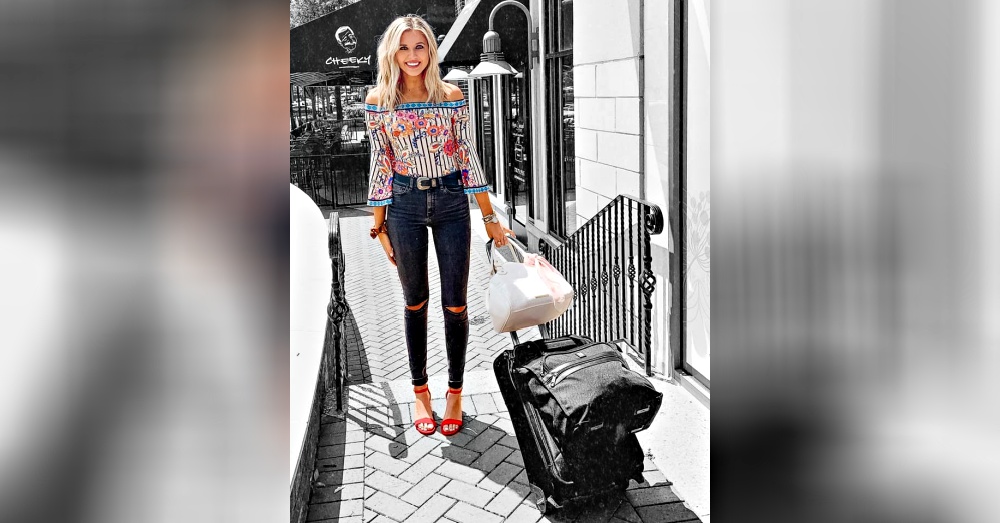 Amanda is well known among the Delta crew for having a soft spot for their younger flyers, noting on her Facebook page, “If you ever can’t find me on a plane, look for the kids. I promise you that’s where I am.” Sure enough, Amanda was the first person who’d stepped up to help mom Sonja Redding and dad Bryan Johnson in ages.

Both Xayvior and his sister Sarahya suffer from a deadly genetic disease called Methylmalonic Acidemia (MMA) which causes a buildup of acid in the blood. The family had just finished a medical research trip as they search for treatment options for their kids. As of now, there is no cure for MMA. 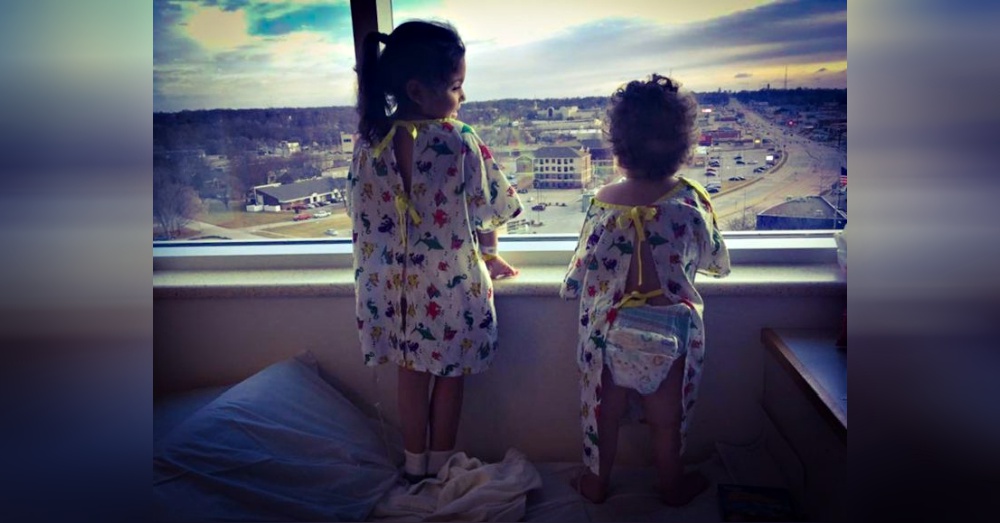 During the doctor’s visits, Xayvior was also diagnosed with autism. His mom notes, “My son Xayvior has a lot of anxieties and due to his special needs and recently diagnosed autism he responds suddenly with change.”

Even though Xayvior had done well on the first flight of their journey he wasn’t so keen on the second leg. Once he began to melt down his family was helpless to stop him, leading to embarrassment and stress for Sonja. Sonja admits that she was at her wit’s end when Amanda approached her. 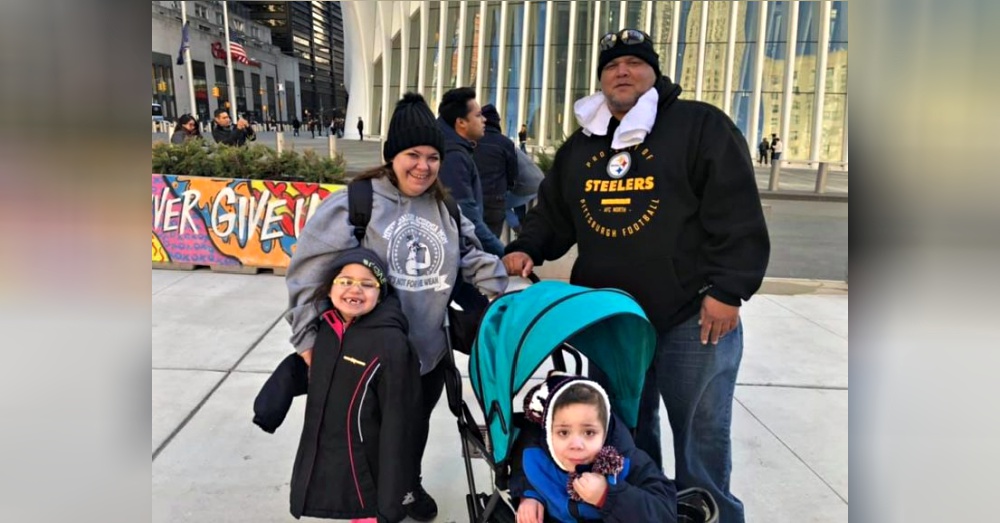 “It felt like everyone on the entire plane was looking at us and annoyed by my son’s outburst,” she wrote. “It can feel very frustrating and isolating when others just don’t understand that he is not just a kid with no discipline, but rather a child with special needs who doesn’t know how to control his responses to things.

“Anyhow, this flight attendant came up and asked if she could hold him and take him for a walk. I warned her that he might get aggressive with her and try to gouge her eyes (he does this often and it is a sensory processing issue)… she quickly responded that she did not mind and swooped him up, taking him on a tour of the plane.” 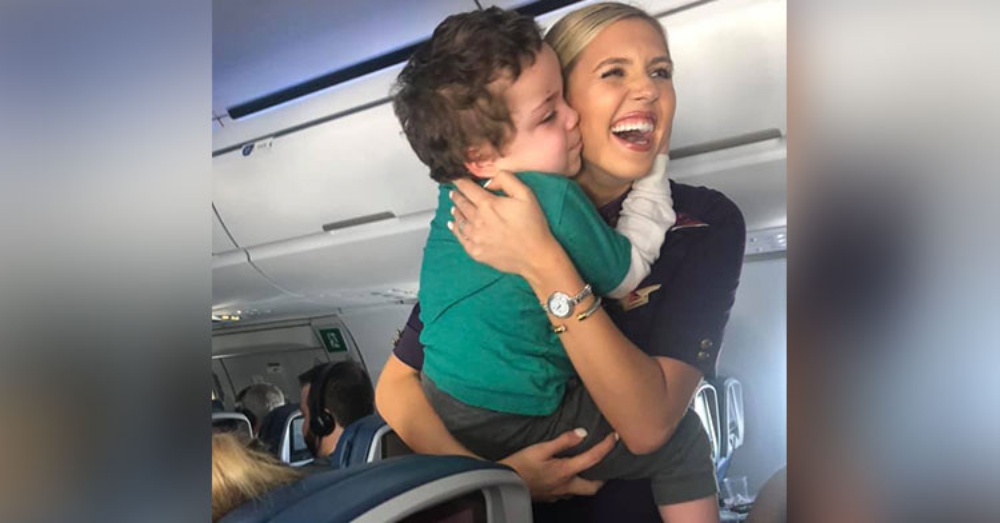 Amanda spent the next 20 minutes walking up and down the plane’s aisle with Xayvior, who settled down immediately in the arms of his new friend. Sonja said it felt great to be seen but not judged by this kind flight attendant, adding, “We need more people like this in the world.” 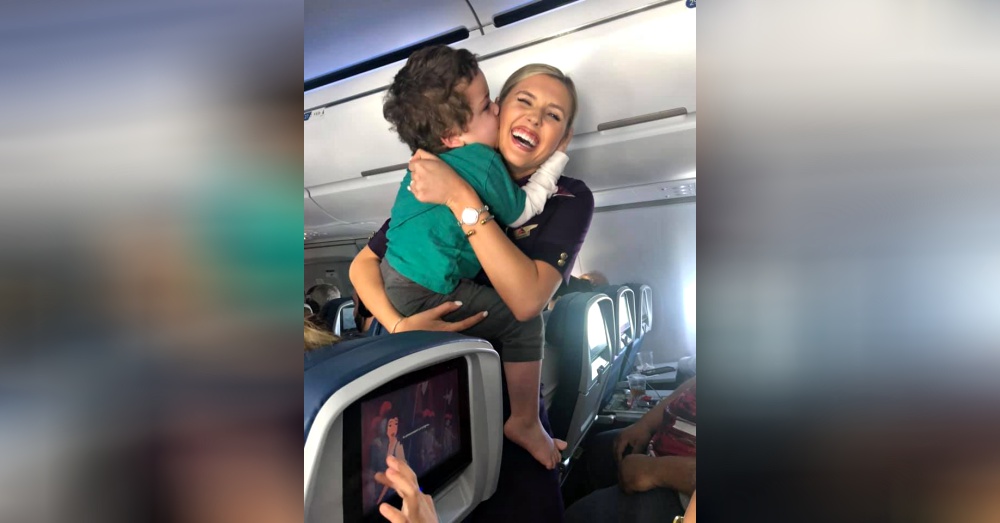 “This hero gave us a bit of sanity back in a chaotic moment. When they came back, Xayvior was much [calmer] and he just loved on his new friend so happily!” Amanda later said that what she did was just another day at work for her; she simply makes it a habit to be empathetic to other people’s “normal.”

“I showed him all the other people on board and he quietly looked all around,” said Amanda. “People don’t always understand that their normal isn’t everyone else’s normal. This is this family’s normal.” 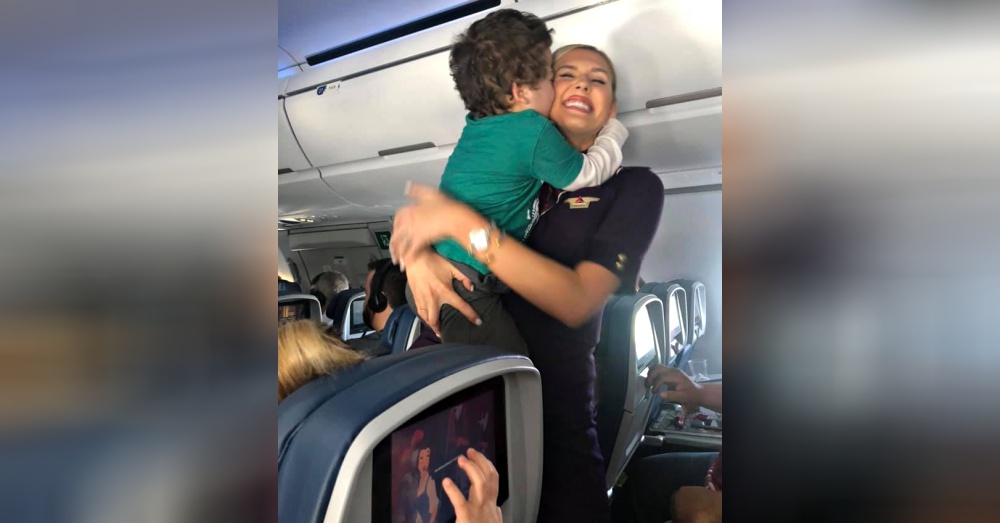 Amanda grabbed this opportunity to be this family’s angel that day, and her swift, kind action should serve as a reminder to us all. Next time we see a child melting down, instead of judging the family why not offer to lend a hand? We always have a choice to be either a part of the problem or a part of the solution. Which will you choose?

Please share this story to thank Amanda for her kindness!

She Has Down Syndrome And Her Husband Has Autism, And They’re Madly In Love: Click “Next” below!