For Years, Experts Assumed This Autistic Boy Couldn’t Understand Them. Now He’s Written A Novel That Proves Everyone Wrong.

Every April, communities gather to celebrate Autism Awareness Month, which was founded in 1970 to foster awareness, acceptance, and a better understanding of autism. In the subsequent decades, diagnoses have only grown, according to the Autism Society, which describes autism — which now affects roughly 1 in 54 American children, according to the CDC — as the country’s fastest-growing developmental disorder.

But our understanding of autism hasn’t kept pace with its skyrocketing growth, at least not according to Ido Kedar, a non-verbal autistic young man who spent the first 7 seven years of his life unable to speak, sign, emote, or communicate with the outside world in any way. (You might remember Kedar from our review of his memoir, Ido in Autismland, which he wrote as a teen after learning to type on an iPad, despite the many “experts” who said it couldn’t be done.) 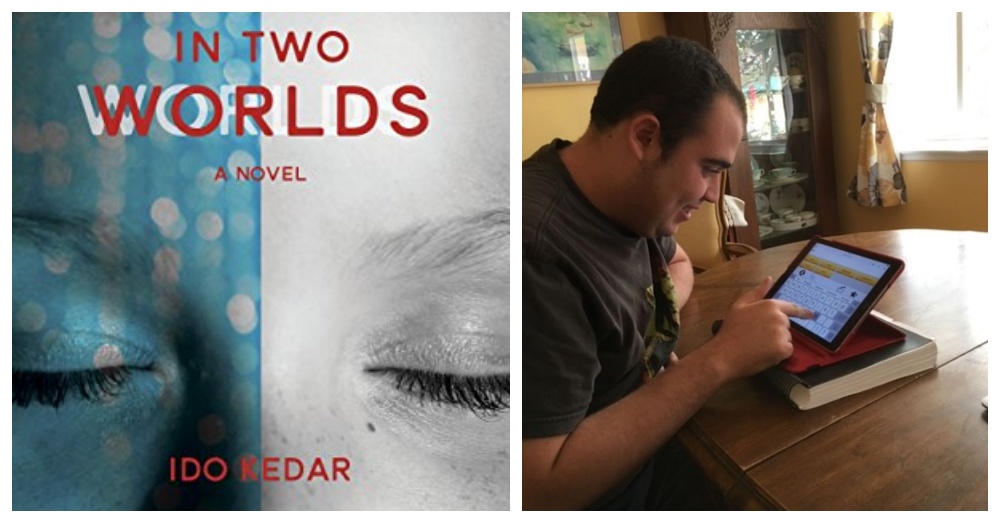 Kedar’s second book, In Two Worlds: A Novel, also challenges the many misconceptions surrounding non-speaking autism through the eyes of a fictional boy named Anthony. Like the author, Anthony is a so-called “low-functioning autistic” who flaps his hands, makes strange sounds and, at 7 years old, still struggles to speak, tie his shoes, and follow basic instructions.

This leaves the protagonist’s parents, teachers, and countless “professionals” certain Anthony’s mental processing must be equally limited. But in fact, Anthony is a highly-intelligent child whose “mucked-up motor system” leaves his body refusing to obey his brain’s commands.

“My autism was explained incorrectly in front of me a thousand times,” writes the author, who is now 23 years old, in the book’s introduction. “So once I became a proficient communicator, I had an urgent need to educate others about the misunderstood nature of my disability.” 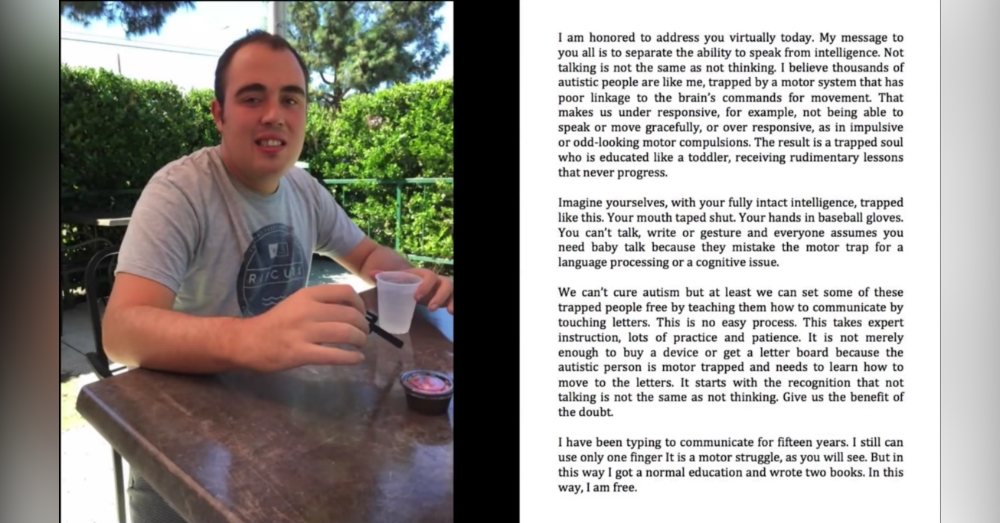 Text of the author’s speech at a UN Autism day event in 2019. Screen shot: YouTube/idoinaustismland.com

For Kedar, who also blogs about autism on his website, Ido In Austismland, writing a novel was a way to portray autism from different angles while exploring a new creative outlet. (As far as we know, In Two Worlds is also the first novel written by someone with non-speaking autism.)

Yet while Kedar’s own experiences have helped shape Anthony’s story, the author, his protagonist, and their families aren’t exactly the same. “This is a work of fiction,” Kedar writes. “Nevertheless, the characters represent real people, and the struggles are the real struggles of parents, siblings and people with autism.” 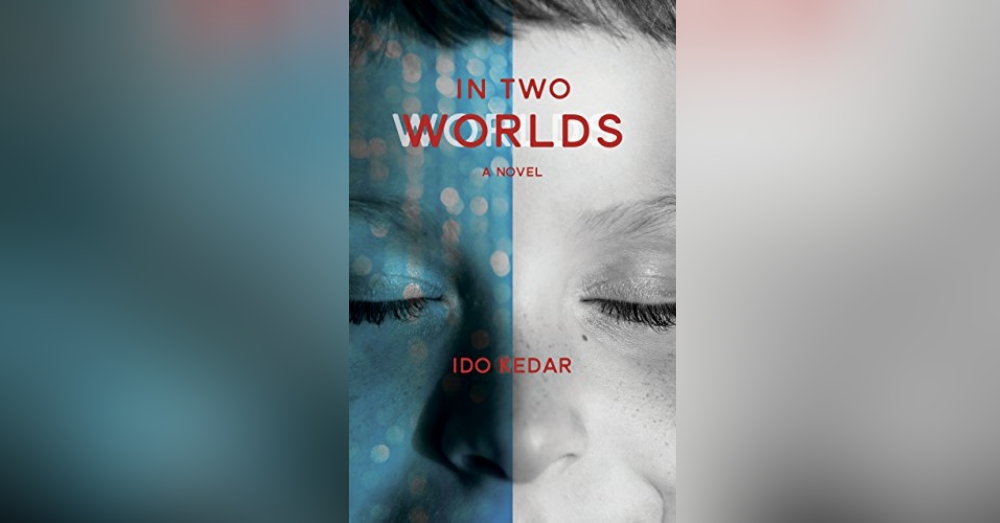 Above all, In Two Worlds introduces readers to the lonely, isolating reality of non-speaking autistics, who are unable to communicate, constantly misunderstood, bombarded by sensory output, and frustrated by years of baby talk, misdiagnosis, and remedial education.

“The reader is the only one, besides the protagonist, Anthony, who knows he is smart and understands everything,” Kedar explained in an email to The Autism Site. “Consequently, they share his experience of living in a patronizing world that endlessly misunderstands him and underestimates him.”

This heartbreaking existence takes on extra poignance during the coronavirus pandemic, during which many of us feel isolated, starved for social connections, and overwhelmed by our lack of control over the situation. It is difficult to imagine navigating these challenges on a regular basis, but this solitary existence channels the daily reality of many autistic children. 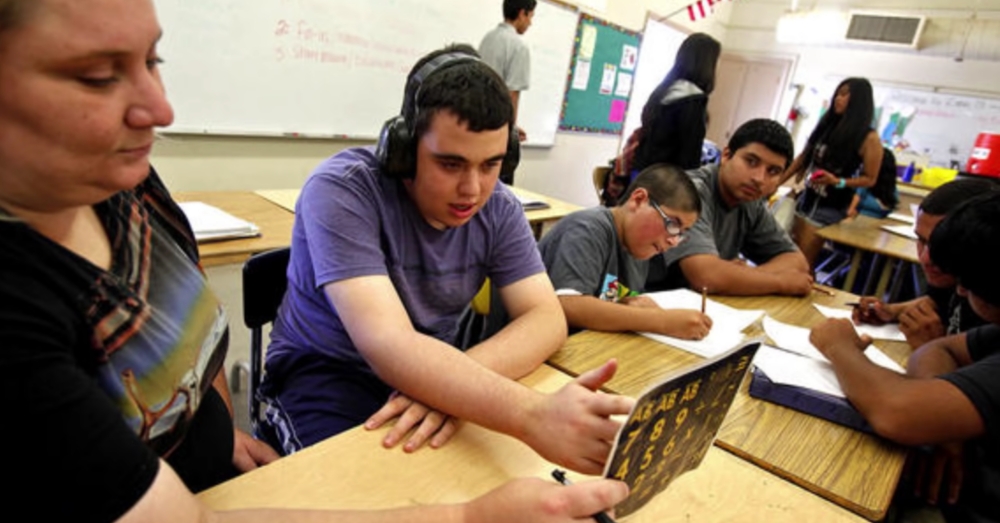 The author learning to type on a special letter board. Screen shot: YouTube/idoinautismland.com

“My dream is that no autistic child suffers the way I did, and many others have and still do,” writes Kedar, who credits learning to type — which allowed him to finally communicate with the world outside — with changing his life.

“Life in silence is hard and isolating,” the author continues. “If the silence is compounded by being mistaken for a non-thinker and no education ensues, then the trap is a horrible one. I have seen tragic situations and I must fight for those who have not yet been liberated by communication. I will never stop advocating and if my masterpiece, In Two Worlds, helps spread the word to the general public and people begin to look at autism in a new way, I will be thrilled.”

You can purchase a copy of In Two Worlds: A Novel on Amazon.com.

J. Swanson is a writer, traveler, and animal-enthusiast based in Seattle, an appropriately pet-crazed city where dog or cat ownership even outweighs the number of kids. When the weather permits, she likes to get outside and explore the rest of the Pacific Northwest, always with a coffee in hand.
Proper greatergood_ctg_belowcontent
Proper greatergood_ctg_footboard