Parent-teacher nights are something all parents are familiar with. Though the process varies from school to school, families can expect to learn about what their children have been up to, see some of their work, and talk with teachers. What one father didn’t expect was to see something that broke his heart.

When Bob Cornelius went to parent-teacher night for his son, Christopher, who was in sixth grade and on the spectrum, he was able to see some of his son’s schoolwork hanging on the wall, and he snapped a picture of it.

But it wasn’t until he got home that he fully read what it said, and he was floored by it.

It was a simple questionnaire with fill-in-the-blank prompts to answer “Fascinating Facts” about yourself, like your favorite things, your family, and the future. 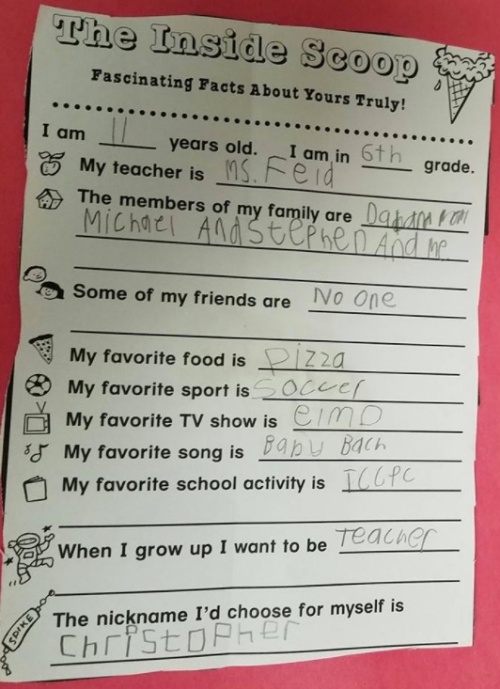 Bob was heartbroken, and knew he had to do something to help his son and other families like his. As a social worker, he worked with other families with children with special needs, and he knew his son’s experience was not isolated. So he sent out a plea on Facebook for understanding.

He explained how seeing his son’s answer affected him deeply, and what a great kid his son was — if only other kids could see it.

“And it’s not their fault…. that’s the saddest part,” Bob wrote. “They were clearly not taught to embrace and accept the differences of others. Not by their teachers, which would have been nice, had they thought to do so, but by their parents. I don’t mean to imply that parents that don’t have this conversation with their kids are bad people, but only that somewhere in between working, soccer practice, and homework, it never occurred to them to have this particular conversation. I’m sure that if Christopher were typical (that’s the word we use instead of “normal” in our world of ‘Holland’, for our developmentally delayed children), I would have not had this conversation with him either.” 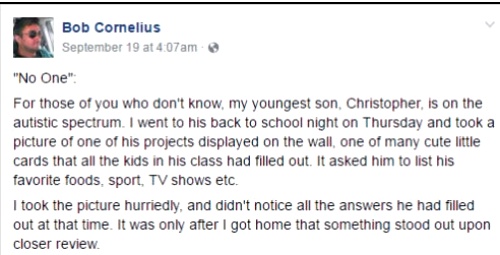 Bob talked about some of his son’s behaviors, and how he was unaware of just how much his son felt the “divide” between him and his peers until he read his son’s response to this one question. He urged parents and kids to realize that people with special needs are still people; that they’re aware of more than we give them credit for — and that even if they can’t say it or express it, they all need a friend.

The post he wrote went viral, and was shared thousands of times. It got picked up by news stations and radio outlets around the world.

Strangers sent Christpher cards and gifts, and a couple children even sent in videos and letters offering to be Christopher’s friend.

“It’s been a little strange, and overwhelming, but I am very gratified people are sharing it and seem to be using it to start a conversation,” Cornelius told The Daily Record. 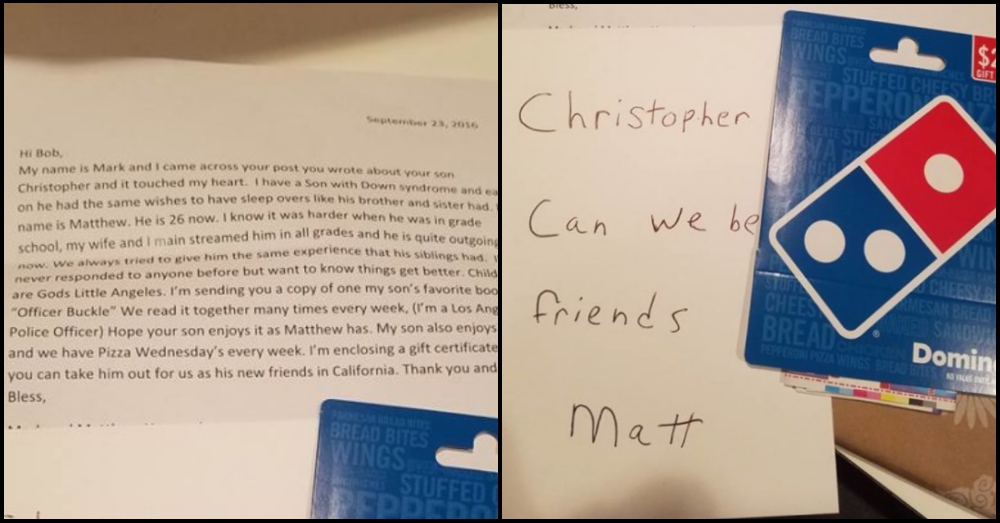 In his post, Bob offered a solution to the issue:

“The only solution I can come up with is to share this with you and ask that you have a conversation with your kids. Please tell them that children with special needs understand far more than we give them credit for. They notice when others exclude them,” Bob wrote. “They notice when they are teased behind their back (a lot of times “behind their back” is right in front of them because they think the ‘different’ child doesn’t understand). But mostly they are very much in tune when they are treated differently from everyone else.”

At The Autism Site, we fully agree with Bob’s sentiment, and echo his request to parents: speak with your children about this.