Those on the autism spectrum often have special interests, or obsessions. For Evan Robinson, a 16-year-old with autism, his was inflatable lawn decorations. He’d mowed lawns to save enough money to buy one—a Halloween inflatable of ghosts behind a tree. He loved it like someone might love their very first car or very first house.

But this past Halloween, trouble struck.

“He called us, uncontrollable, [distraught], crying, having a breakdown, saying someone took his inflatable,” said his father, John.

The family realized it was missing while handing out candy to trick-or-treaters, and they called the police to report the theft. 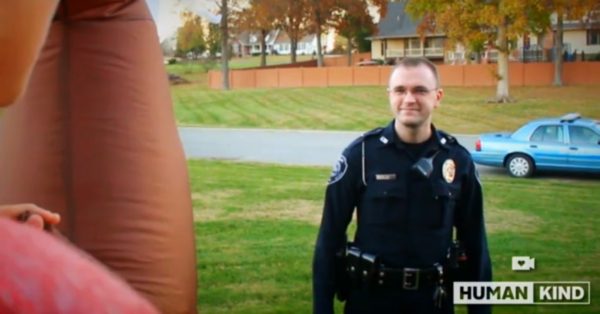 Officer Ryan Miller of the Farmington Police Department arrived at the scene and realized just how much the inflatable meant to Evan. Without any solid leads, there was little he could do to help, but he felt terrible for him.

“Some people may think, ‘So what, it’s a decoration,’ but to him, it was his world,” Miller said. “I could tell. He cared about it like he would a pet, and he’d take very good care of it.”

Shortly thereafter, the police department wrote about the case on their Facebook page, asking if anyone could possibly help. Sympathetic and outraged comments quickly streamed in.

Meanwhile, Miller did something amazing: he bought an inflatable Christmas lawn decoration and left it on the Robinsons’ doorstep with a note attached, asking Evan to “pay it forward” and treat others with kindness, as well.

This in and of itself was incredible enough, especially considering the rocky relationship that exists between police officers and the autism community. But very early the next morning, another miracle happened: the thief returned the Halloween inflatable. Maybe they’d read the Facebook post and felt bad?

Whatever the case, Miller was amazed. “In the time that I’ve been a police officer, someone returning something they stole out of their own volition…I’ve never seen it…never seen it.”

What will you do to “pay it forward” today?