For people with autism, activities that seem pretty basic to most other people can be very challenging for them. Getting a haircut, for example, is one thing many kids on the spectrum struggle to handle, largely due to the sensory issues that accompany it.

But sometimes, people do awesome things to make it a little easier on them. And Kaylen Barker, a hairstylist at Sports Clips in Charleston, West Virginia, was one of them. 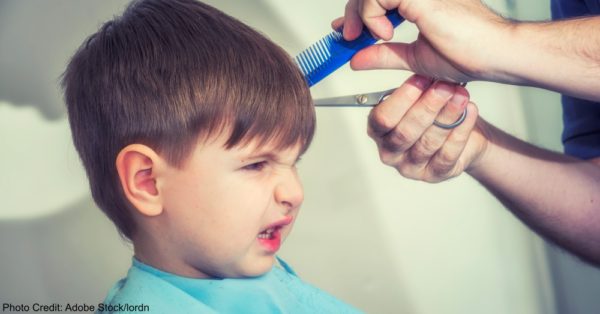 Jennifer McCafferty’s four-year-old son, Isaiah is on the autism spectrum and he does not take well to haircuts—the clippers are upsetting, and he doesn’t like things coming near his ears. So it wasn’t too surprising that his most recent haircut became a bit of an ordeal.

But Barker, the employee working on him, wasn’t going to give up, even when McCafferty was about to throw in the towel, herself.

To make the haircut more comfortable, Barker let Isaiah sit in her lap as she clipped and snipped. “They talked about Dory and Christmas, and she even let him spray her with her water bottle,” McCafferty wrote in a Facebook post that went viral. Barker made him so comfortable and happy that he actually cried when it was time to leave!

McCafferty was incredibly touched by this kind gesture by a stranger, who went above and beyond to accommodate Isaiah’s needs. She was so touched, in fact, that she sent Barker flowers!

Barker was humbled that her actions were such a big deal to McCafferty. “I never knew what impact just doing my job could have on someone,” she commented on McCafferty’s Facebook post. She also remarked that Isaiah was “such a wonderful little boy” who “made [her] heart smile.”

Want to hear more inspiring stories about hairstylists being awesome? Learn about Autism Barbers Assemble and how they’re making haircuts less stressful for kids on the spectrum!