Political Commentators Mocked ASD Boy Over a Viral Video, So His Mom Responded Like a Boss

It was a sweet moment that went viral on the internet but then soon took a turn.

At a White House event for military families, Vice President Mike Pence accidentally bopped the nose of a ten-year-old boy standing behind him. Politely yet persistently, the boy proceeded to get Pence’s attention and ask for an apology.

Many people took this moment for what it was—a sweet, innocent exchange between child and vice president. However, on a Friday segment of Fox News’ Tucker Carlson Tonight, commentators Tammy Bruce and Bill Hemmer did not see it the same way. They mocked the child as a “snowflake” who needed a “safe space.” 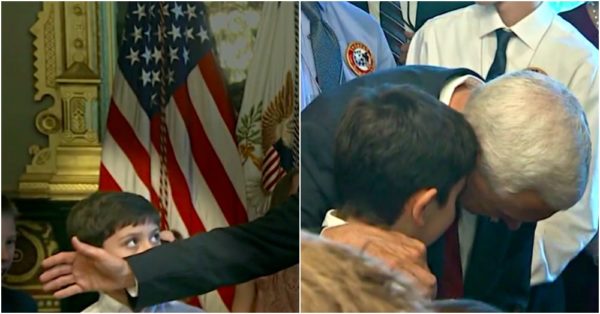 Little did they know that this boy, Michael, was on the autism spectrum and was just following through with what his therapists and teachers had instilled in him. Hearing these commentators taking the situation out of context and saying what they did was devastating for the boy’s family.

So Michael’s mother, Dr. Ingrid Herrera-Yee, took to CNN on Monday May 15, 2017, explaining their story with honesty yet levelheaded graciousness and eloquence. It’s truly amazing to listen to her speak and inspiring for autism advocates everywhere…because she does it right.

Herrera-Yee ended her CNN appearance by asking for an apology from the commentators.

On Tuesday, May 16, 2017, her wish was fulfilled. Tammy Bruce and Bill Hemmer apologized for the incident and thanked the military family for their service.

“First of all, I am so sorry to the family. My intention was never to hurt a kid and his mom. We had absolutely no idea that Michael was on the autism spectrum and, as a gay woman and feminist, I’ve spent my adult life working to improve the lives of women and children and those who are disenfranchised. I get it and I apologize. I also appreciated the boy’s mother’s public comments and clarity on this. A main lesson here, no matter intent, is to leave kids out of our political discussions. We certainly agree on this.” —Tammy Bruce

Learn the full story and check out Herrera-Yee’s incredible testimony in the interview below!