This Type Of Therapy Is A Last Resort, But It’s Saving Some People With Autism

When people think of Electroconvulsive Therapy, or ECT, or “shock therapy,” they often picture the disturbing scenes depicted in One Flew Over the Cuckoo’s Nest—people being strapped down to tables and being tortured with high volts of electricity.

That is not what ECT is like anymore. That awful, awful method died in most parts of the world in the 1950s.

So when I say that some people with autism are receiving ECT, recognize that they are NOT being treated inhumanely! The stigma surrounding the practice is FALSE!

Okay, are we good now? Have you caught your breath? Has your heart rate returned to normal? Good. I just wanted to assure you of that right upfront because I know how scary the thought of ECT is if you don’t know what it’s really like nowadays. Nowadays, people receiving ECT treatment are anesthetized and given muscle relaxants. No broken bones. No torture. 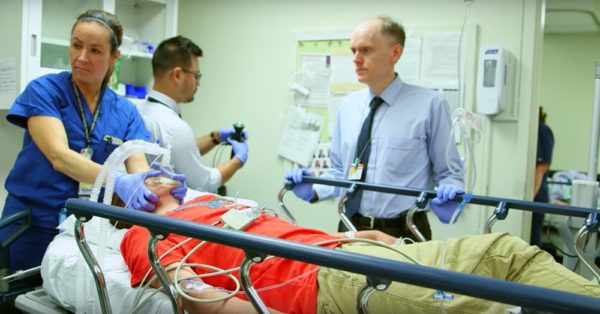 The patient is anesthetized so that no pain is felt during the procedure.

For those of you who don’t know what ECT is and are wondering what on earth I’m freaking out about, it’s a medical practice in which people are electrically shocked into a seizure. Though it’s much safer than it used to be, it continues to be the most contentious psychiatric treatment around. That’s largely because there is a risk of short or long-term memory loss and confusion.

For these reasons, ECT has traditionally been used as a last resort for people with mental illnesses that don’t respond to treatment, like depression and bipolar disorder. Millions of people across the world receive this kind of treatment every year and, in spite of the fact that it may lead to memory loss and other complications, many have benefitted from it and said it was worth the risk, considering how badly they were suffering before.

While it has typically been used for treating mental illness, recent evidence has arisen that it may also benefit people with severe autism. Severe to the point where self-injury is so extreme that it’s constant and there’s little, if anything you can do to stop it—self-injury so severe that you fear for your child’s safety. For some who haven’t been helped by any other treatment option, ECT has been a figurative and literal lifesaver.

It’s actually pretty fascinating, and you can learn more about it (and see a modern ECT in progress!) in the video below.

Though ECT does not live up to its bad reputation, there is another form of “shock therapy” that truly is awful and is happening—shock aversion therapy. Children in the Judge Rotenberg Center are given electric shocks as an aversive. This cruel practice remains legal.

That is unacceptable. Sign our petition if you agree—let’s outlaw such a terrible method!