Many people with autism have special interests in one or two narrow subjects. For Slade Denton, a young resident of Jacksonville, Florida, his fascination was focused on dishwashers and washing machines.

So it makes total sense that he would ask about restaurants’ dishwashers when going out to eat, right? Well, that’s what he did when he and his family met Ashley, the manager of the Ruby Tuesday’s they were dining at.

Slade asked Ashley if the restaurant’s kitchen had a big dishwasher like the one his old school had. Ashley cheerfully told him that it did, and she told him about her favorite dishwashers.

After Ashley had left the family’s table, Slade continued talking about his favorite subject and expressed that he wanted to see the one Ruby Tuesday’s had.

“You’ll have to wait till we get home because you can’t go in the kitchen here,” his father told him. “It’s only for people who work here.”

Slade didn’t argue. “Okay,” he said and went back to his coloring page and crayons.

His stepmother, Katie, started thinking. Surely it would be okay to let Slade see the dishwasher through the window or something. Why not ask? So she tracked down Ashley, introduced herself, and started, “You’re going to think I’m crazy for asking this, but…”

Before she could even finish her sentence, Ashley jumped in. “I’m already planning on bringing him in the back and letting him run some dishes through the dishwasher.”

Katie was floored. “I almost fell to my knees. I started sobbing,” she wrote in a Facebook post. She pulled Ashley into her arms like a sister and managed to say, “You are seriously about to make his life!” 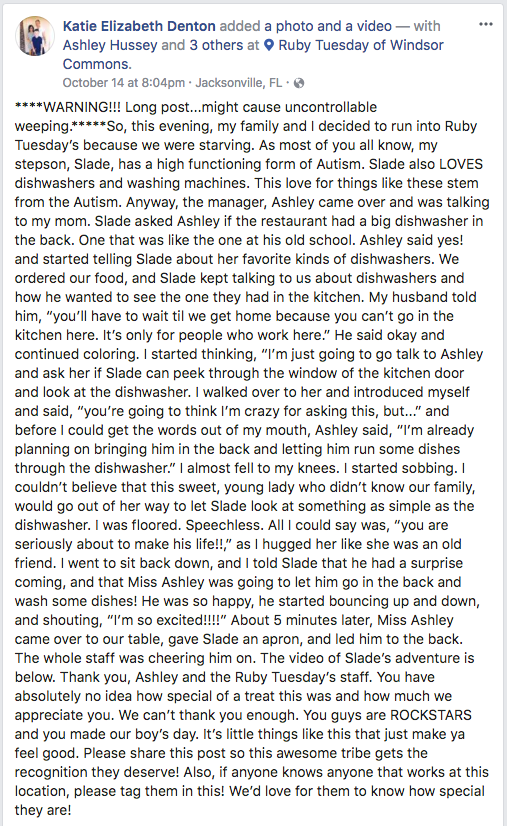 As expected, Slade was ecstatic to learn that he was going to get this special opportunity; he bounced in his seat and proclaimed, “I’m so excited!”

A few minutes later, he was donning an apron and heading into the kitchen to put some of the restaurant’s dishes through the dishwasher. Katie captured his experience in the video below.

This sweet story serves as a great reminder that nice things, however small, can have a huge impact. So go out and do something nice for someone today. You never know what the smallest gesture could do!