Differently-abled heroes now have a place in comic book stores next to classic heroes such as Superman, Iron Man, Batman and Wonder Woman. Dan White literally drew inspiration from his 9-year-old daughter to create the Department of Ability, a group of superheroes who all have some kind of visible disability.

White’s daughter, Emily, was born with spina bifida and hydrocephalus, and she uses a wheelchair for mobility. The devoted father searched everywhere to find characters in comic books, television shows and other media with whom Emily could relate. White found a few, but they were always on the sidelines or didn’t have any “real character to show off,” he told Huffington Post.

So White created his own comic series with Emily as the main character. The leader of the Department of Ability uses a flying, jet-powered wheelchair to zoom to the rescue. Pawsy, the cheetah, has a solar-powered running leg that lets him move quickly along the ground. Extraterrestrial being Azazzatz has a bionic arm to punch bad guys in the gut. None of these superheroes “lecture anyone or generate sympathy,” White said, according to ABC News.

Strongbones Children’s Charitable Trust plans to publish the comic book series — which uses the tagline: “Born to be different. Born to save the world!” — sometime in 2016, but White hopes mainstream comics pick up on his idea. He wants the public to “see beyond the disability, taste the humor and the action, and to see a very underrated portion of society in a whole new inclusive light!” 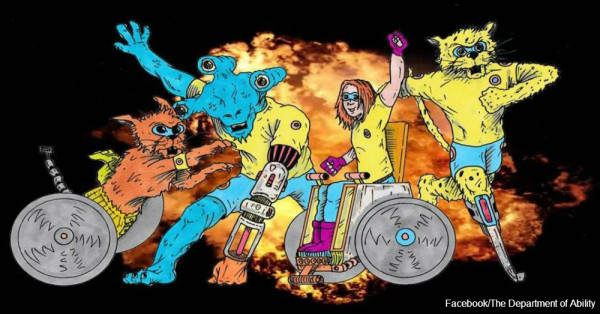 Until hard copies come out, fans can follow the adventures of the Department of Ability on the comic’s official Facebook page, where the author posts regular images. One of the drawing shows all five members of the group with Emily’s superhero in the middle. Three of these superheroes feature sky-blue masks, and a fourth has a sky-blue head, a color that symbolizes hydrocephalus awareness, according to Hydro Angels Over America.

If you think this idea is cool, check out the first comic book to feature a superhero with autism.