Eashana Subramanian of Derwood, Maryland, wanted to help her sister Meghana, who’s on the autism spectrum. Meghana had trouble dealing with school at times because she requires a strict routine to get through her day. But when she came home at night, her parents wouldn’t know what had happened during the school day, and therefore, weren’t able to help her. Eashana saw these problems and decided to create an app to help her sister. 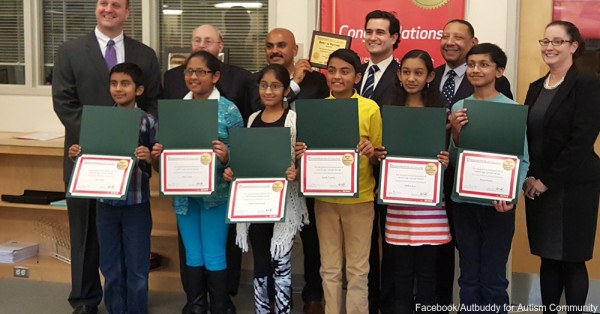 Eashana teamed up with other kids from the Adventures in Science Club, a nonprofit based in Maryland that promotes science, technology, engineering and math education. The six-student team of young scientists created the app AutBuddy, which is designed to keep kids on the autism spectrum maintaining a routine across their home and school lives.

AutBuddy helps kids with autism express themselves to others and keep them focused. In addition, the app facilitates real-time communication between parents and teachers to help both sides keep up to speed with what’s going on at school and at home, respectively.

The AutBuddy app design was a huge success in more ways than one. In February 2016, Eashana and her colleagues won $20,000 in the Verizon Innovative App Challenge, which is designed to encourage kids to develop technology that can help solve real problems in their own communities. The AutBuddy team was one of only eight winners in this massive national competition.

The next stop for Eashana and her team is the MIT Media Lab, which will actually produce the app. AutBuddy should be available on Google Play in June 2016.

Smartphone apps open up a whole new avenue of communication for those on the autism spectrum. Click here to read about an app developed by a college student with autism to help with communication during emergency situations.