On April 12, 2017, a 10-year-old boy with autism was arrested and spent a night imprisoned in a juvenile facility. The reasoning: he committed a third-degree felony by kicking a paraprofessional at his school, Okeechobee Alternative Academy, in the fall of 2016 (allegedly because he did not feel safe).

Following that incident, the boy, John Benjamin Haygood, was dismissed from the school and had to spend the next few months continuing his education from home. But when he came back to school to complete mandatory testing, he was identified as “having an outstanding warrant for assault,” according to The Huffington Post. School resource officers handcuffed and arrested him. 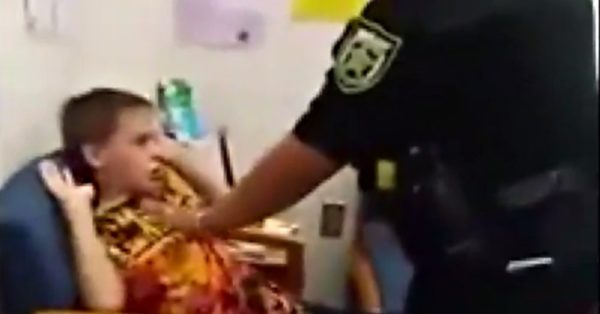 His mother, Luanne Haygood, captured the disturbing moment with her phone as she strove to advocate for her son. “Does he have the same rights as an adult?” she asks them.

In the video, the distraught John can also be seen pleading the officers not to touch him. As they led him outside to the car, he cried out, “I don’t know what’s going on, Mama! I don’t understand.”

You can see the footage below. But fair warning: it’s not easy to watch.

While she acknowledges that John has had behavioral issues in school, she says it’s because of his autism and that arresting him was not the answer. “To go and have him arrested on school grounds in front of other students, in front of personnel, during school hours, they could’ve come to my house at anytime to tell me what was going on,” she said.

Police and prosecutors responded by saying they weren’t aware that John was on the spectrum. According to the state attorney, his disorder “will be taken into consideration” as his case is pursued.

The Okeechobee County School District has also released a statement about what happened, saying they “would not invite someone to one of [their] campuses for the sole purpose to arrest.”

“The district is unable to provide specific information as to both current and past incidents regarding this or any other student due to educational laws and rules,” they said. “It is our hope that we can continue to work with all families to help their students improve both behaviorally and academically.”

This case highlights the incredible need for increased autism awareness, especially amongst law enforcement. Sign our petition to help us get autism training for all police officers!