Cerebrospinal fluid (CSF) is a liquid that surrounds the brain. We used to think it was just a protective barrier between the brain and the skull, but we’ve more recently discovered that it flushes waste out of the brain.

According to a new study published in the journal Biological Psychiatry, levels of CSF in the brain may also be associated with autism.

The study was conducted, in part, by the University of North Carolina. Researchers collected data on the brains of 343 infants—which included MRI scans. Most (221) of them had an older sibling on the spectrum, meaning they were at high risk of having autism.

The data was collected at various points of the children’s lives: at six months of age, 12 months, and 24 months. At the age of 24 months, 47 of the high-risk children were diagnosed with autism. 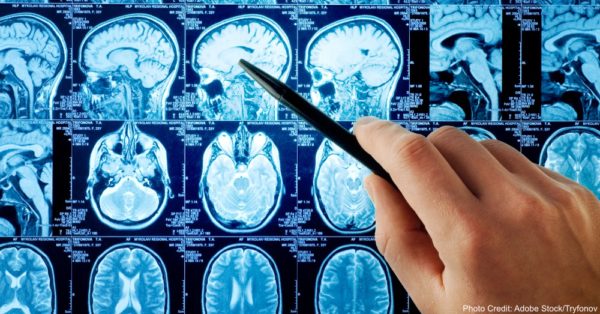 The researchers found that, of these high-risk babies with autism, 70 percent had (about 18 percent) more CSF in their brains than the control infants. They found this to be the case as early as six months. And that wasn’t all: the amount of CSF in their brains was correlated to the severity of the autism. For example, babies with more severe autism had 24% more CSF than the control group. Higher levels of CSF were also correlated to deficits in gross motor skills.

What does this mean? Increased levels of CSF are very prevalent in children with autism—at least for those with high genetic risk. Researchers hypothesize this is the case because CSF does not properly flow through the brain, so byproducts hang around—which leads to inflammation.

So CSF levels may be a potential autism biomarker—a biologically detectable way to determine if a child is on the spectrum. The CSF differences are detectable as early as six months.

The truly interesting thing about this study is that it doesn’t exist in a vacuum; a previous study, published in 2013, also found a correlation between CSF and autism. The fact that these two studies seem to agree with each other strengthens the evidence that CSF is associated with autism.

However, we’re not yet ready to use CSF to predict autism development. For one thing, not every high-risk child later diagnosed with autism had increased levels of CSF—only about 70 percent. In order for CSF levels to be a viable diagnostic measurement, accuracy would need to be around 90 percent. Additionally, we’re not sure if this study only applies to high-risk children, or if it could be used on others.

Researchers are nevertheless excited about these findings. With some more work, we may someday be able to diagnose autism much earlier through this potential biomarker. Then we could start therapy even earlier—which would be hugely beneficial to affected children.