Layla Lester is a 5-year-old girl on the spectrum who loves Disney princesses. So when she saw a bride at her local park, she naturally mistook the be-gowned woman for fairy tale royalty — Cinderella, to be exact.

“Cinderella” was actually Olivia Spark, who was taking wedding photos at New York’s Akron Falls Park when Layla ran up to her, excitedly exclaiming “Cinderella! Cinderella!”

The wedding party paused their photo session so Layla could meet the princess, and it was just as sweet as it sounds.

Layla sometimes struggles with social interaction, especially with strangers. So her reaction to Spark was even more precious, but also, understandable. Cinderella was a familiar face and a friend, not a stranger, after all.

She told Spark how beautiful she was, and reached out to touch her dress.

The wedding photographer, Nicole Wickins, captured photos of the special meeting, and there was also some brief video taken. The entire wedding party was moved to tears by this little girl.

After some hugging and hand-holding and smiling, Spark explained that she had to go to the ball now — something that Layla immediately understood. She cheerfully told the princess to “have fun at the ball!” and she and her mother, Jessica, left.

“I was flattered,” Spark said. “I was in tears that she thought I was a princess, and it just made my day absolutely more amazing than what it already was.”

After the wedding photoshoot, Spark’s mother-in-law posted a recap of the impromptu meeting and asked for help finding the little girl and her mom on social media.

They quickly found her. 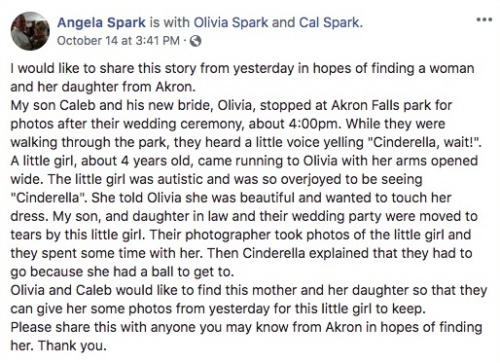 Spark and Layla were soon reunited. Spark gave Layla some presents, they chatted, and Layla continued calling her Cinderella.

And, of course, Spark shared the photos of Layla and her from her wedding day.

“She is the epitome of what a real life princess would be,” Layla’s mom, Jessica, says. “She’s kind, and she’s sweet, and she went out of her way to be nice to Layla.”

But the story doesn’t end there!

After the photos went viral, people in the community started a GoFundMe page to send Layla to Disney to meet the “real” princesses! The original goal was set for $5000 but was quickly met, so it’s since been raised to $15,000.

Watch the video to learn more!