Ben Gretchko is a graduate from Seaholm High School in Birmingham, Michigan, as well as a young man on the autism spectrum. At his high school graduation, he was the first of four people to give a speech. He may not have been class president or the valedictorian of his year, but that didn’t stop him from giving a speech that was received with a standing ovation and touched hearts everywhere.

His speech has gone viral, too, receiving over 1.6 million views within a few short weeks of his graduation.

Gretchko, who was diagnosed with autism when he was two-and-a-half years old, was not always verbal, however. He didn’t speak, he didn’t babble…in fact, the doctors advised Gretchko’s parents to learn sign language in case he never spoke.

Thanks to years of work and dedication, this prognosis turned out to be untrue, and Gretchko managed to overcome a number of challenges throughout his life.

In his speech, he thanks those who helped him along the way—from his peers who accommodated his needs and treated him with kindness to the teachers who pushed him and never gave up on him. It’s an incredible encouragement and reminder to parents, teachers, therapists, peers, and all others who interact with and work with people on the spectrum: you are appreciated, and your hard work, dedication, and kindness is never in vain.

“Him going up at graduation and saying what he said, that’s why, that’s why I am a teacher,” said Stacey Raznick, one of Gretchko’s former teachers. “You can change someone’s life.” 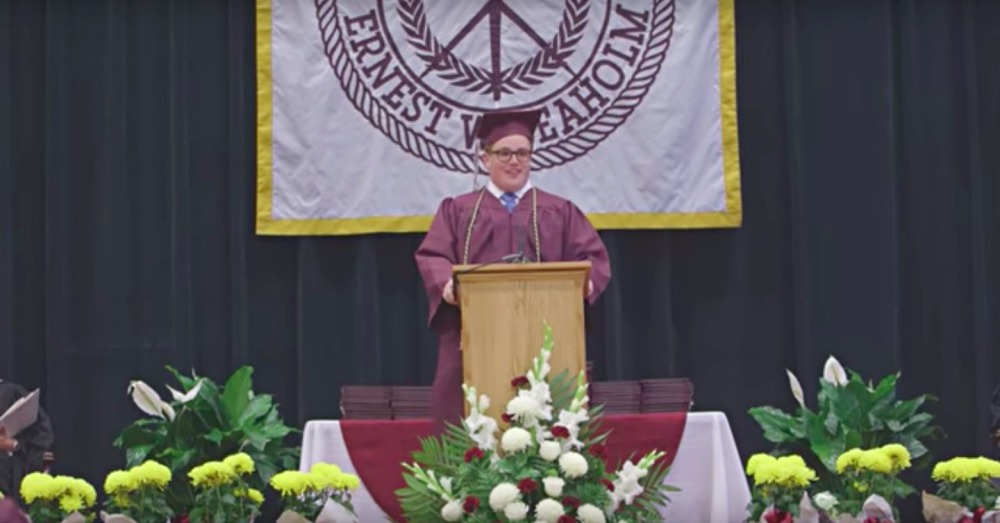 Along with thanking those who helped him along the way, Gretchko also advocates for kindness among those who need it.

“Just as everybody here has been so helpful to me, I encourage you to be compassionate and helpful to anyone that needs your help,” he says. “Your acts of kindness can and will make a huge difference in the lives of others, just as they made me the person I am today.”

Though his speech was one of four, it was allegedly the speech that everyone was talking about at the end of the ceremony, Gretchko’s father reported proudly.

Now that Gretchko has graduated from high school, he plans to attend Western Michigan University in the fall of 2017. Beforehand, he will go through a transitioning program aimed toward students with special needs.

Ben, we wish you the absolute best on this new journey! You’re going to be awesome.

Listen to his incredible speech in the video below!