Boy Comforts Classmate With Autism On The First Day Of School

It’s hard to believe that the time has come for kids to go back to school. Parents everywhere are happy with the extra time but they also worry about their little ones as they take on suck a unique challenge. It is even worse for some kids who have special needs.

Christian Moore of Wichita is a child who went back to school and is taking the opportunity to show other kids that they have a friend. A special moment was captured by his mother, Courtney, as she took pictures of his first day. One of those pictures was shared on Facebook and it went viral.

When 8-year-old Christain saw another classmate, Connor, having problems, he decided to step in and do the right thing. Connor was having a hard time because he is autistic and was crying in the corner. Christian was quick to go over and comfort him.

“I’m so proud of my son,” said Courtney Moore in the caption. “He saw a kid called up into a corner crying, so he went to console him, grabbed his hand and walked him inside of the school. It is an honor to raise such a loving, compassionate child. He’s a kid with a big heart, the first day of school started off right.”

“Tell your son I said thank you so very much,” she commented on the post. “That little boy he helped is my son and is autistic, I worry every day that he is going to get bullied for being different and your son just absolutely warmed my heart. If there were more children like him I wouldn’t worry about such things.” 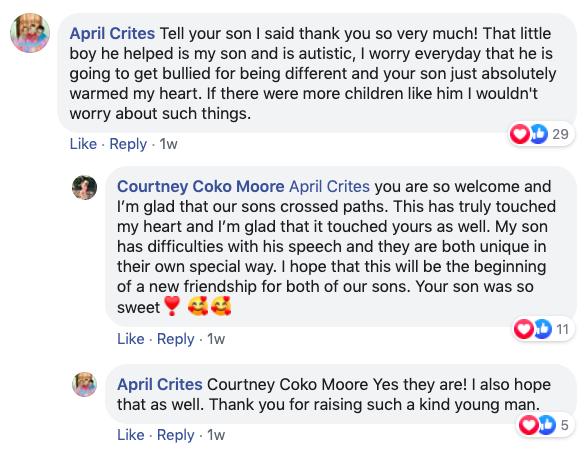 Courtney said that her son “has difficulties with his speech and they are both unique in their own special way. I hope that this will be the beginning of a new friendship for both of our sons.” 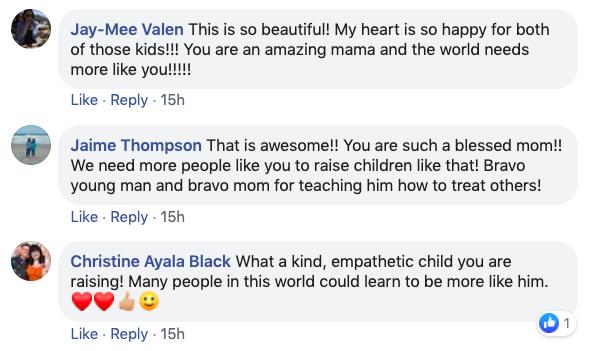 “This is so beautiful! My heart is so happy for both of those kids!!! You are an amazing mama and the world needs more like you!!!!!” said one commenter.

“What a kind and empathetic child you are raising! Many people in this world could learn to be more like him,” said another.

Moore was overwhelmed by the positive reactions and shared that she hopes her son’s kind actions will help “bring change to the world, putting an end to racism and to bring people together in unity.”

“There is no color in love, change starts from within.”