For James Rink, a 9-year-old with Down Syndrome and autism, an iPad helped him communicate for 7 years before going out of commission. That meant he was forced to use Mom’s iPhone 5 for a while. That is, until Mom got together with a friend of hers. This friend of LynnMarie’s was part of The Fiona Rose Murphey Foundation Charitable Trust. Through them, James could get a free iPad.

So off to the Apple store went LynnMarie and James. 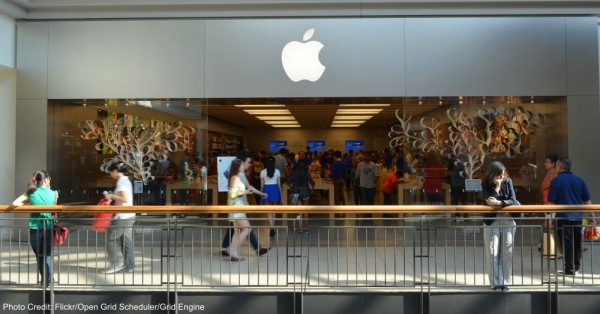 While browsing, something interesting perhaps seized James’ eye. He tore across the store, heading for the door. But it wasn’t a door—it was a glass wall.

THUD! James’s head slammed against the transparent pane. The impact of his collision caused him to fall back and smack his head against the ground.

The shoppers in the store collectively gasped. LynnMarie was horrified. She scurried to her son, whose subsequent tears came and went; he had a high pain tolerance. Then he started watching the passersby on the other side of the glass.

An Apple employee approached them. Asked if James were okay. Asked if there were anything he could do to help.

“Well, we actually came here today to buy an iPad which was donated to James,” LynnMarie said, “but if we’re going to proceed, would you be willing to sell it to us and set it up…down here on the floor?” She believed that getting him to move would upset him.

And that’s exactly what the employee did. LynnMarie was touched.

LynnMarie wrote about the encounter in a Facebook post, commending the employee for his kindness. The story touched other people, too, and it went viral.

As for the employee? His name is Andrew Wall, and he hopes to be a youth counselor in the future. “I began working at Apple in hopes of having fulfilling moments like this,” he said.

Well, there’s no doubt about it: he’ll be a very good youth counselor someday!