In 2016, Muskegon mom, Brittany Miller, was out shopping with her six-year-old son, Grandy, who is on the autism spectrum. Grandy’s special interest is fire alarms—he knows all different kinds of makes and models, and when he’s overwhelmed, he imitates their noises to calm himself down.

That day in Meijer, he was riding a coin-operated pony and making fire alarm noises. Miller stopped and turned around to help him fix his shoe, and when she looked back up, she found a note placed on top of the bags in her cart.

The anonymous message was short and incredibly rude:

“Buy that kid a muzzle!”

Unfortunately, this kind of occurrence isn’t all that rare for autism parents. Many find themselves falling under the judging eyes of strangers who just don’t understand autism. Others receive unwanted comments. And still others find themselves getting cruel notes like the one Miller received.

But instead of brushing it off, Miller reached out to 24 Hour News 8 and shared the story, hoping to use the letter to educate the public.

The result was far more incredible than she had expected.

For one, it wasn’t long before her email inbox was flooded with messages from all sorts of sources. There were parents thanking her for sharing the story and asking if they could send gifts to her or Grandy. There were fire alarm companies that contacted her, as well.

And several fire alarm companies sent Grandy his favorite thing in the world as gifts, too. “It was like Christmas for him,” Miller said. 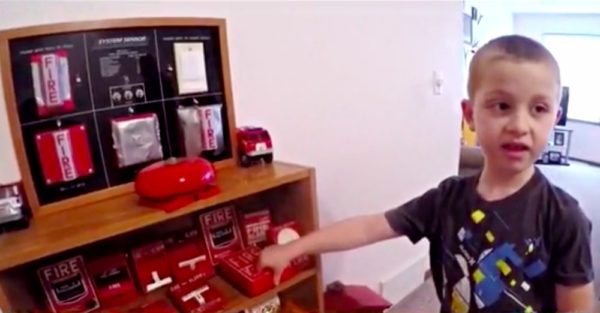 That in and of itself is amazing enough, but something even greater is happening: for Grandy’s seventh birthday—which will be on March 6, 2017, Honeywell Company is bringing the mother-son duo to their factory in Connecticut. There, they will give him a tour and throw him a birthday party. (Best birthday ever? I think so!)

So let this story be a helpful reminder to you. Some people in this world are cruel and ignorant, yes, but there are also so many other people who are kind, understanding, generous, and helpful. As we continue to fight for worldwide autism awareness and acceptance, may this story, and others like it, give us all hope that change is just around the corner.